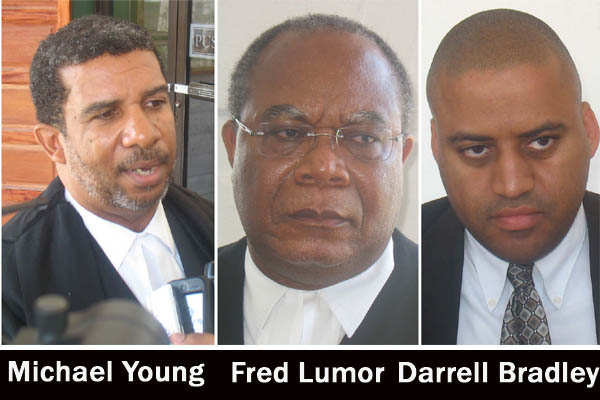 Belize City Mayor Darrell Bradley was spared from being cited for contempt of court today, after his attorney, Michael Young, SC, bought time—just over seven weeks—for Bradley to begin to meet payments towards a $2.3 million debt the Belize City Council (CitCo) has owed the Belize Waste Control since 2005.

“As of today, I can tell you that the total debt owed under the judgment is about 2.3 million…” said Fred Lumor, SC, attorney for Belize Waste Control. “Not one cent has been paid.”

Young points out that at the time BWC was awarded the settlement, the tab was $1 million, but because it has remained unpaid for nearly 8 years, the debt has more than doubled.

The court has agreed to give Bradley’s administration until Monday, April 22, 2013, to begin to settle the debt—or he could face a contempt citation and possible imprisonment for such contempt.

“Every single year, every single council has had problems meeting its obligations…” Bradley told the press after court proceedings today.

He indicated that sanitation contracts account for 40% of CitCo’s outlays.

Last year, the parties were at odds over payments for garbage collection in the City, and Waste Control went on strike over the matter, while workers protested. According to Bradley, every other week, CitCo doubles its garbage collection payments to the company, and they are almost done with paying their arrears.

The $2.3 million has its origins in another dispute between CitCo and the company. Lumor explained that CitCo had allowed other companies to collect City garbage, causing substantial loss to BWC. The matter was submitted to arbitration in 2004, and Young was among those who sat in the arbitration proceedings.

In June 2005, an award was made and BWC was dissatisfied with the award, so it applied to the court to have it set aside, said Lumor. CitCo affirmed back then that the award was reasonable and should be accepted, Lumor recounted.

Although CitCo accepted the settlement, no payment was made, Lumor told the press.

In 2009, Waste Control asked for $10,000 weekly, towards settling the debt. At the time, said Lumor, Mayor Bradley was the lawyer for the Council.

Still, there was no payment made. On December 13, 2012, said Lumor, contempt proceedings were postponed on CitCo’s request for time to pay the debt. Still nothing has been paid, said Lumor.

“Not one single explanation has been given why not even 10 dollars was paid and interest continues to accrue on daily,” said Lumor, quoting the interest at around $260 a day.

Lumor said that the Council undertook again to file an affidavit about the financial position of the Council and to make a substantial payment and to seek to make arrangements to pay the balance on terms to be proposed to the court.

The parties are scheduled to return to court on Monday, April 22.

Lumor told the press that the application for contempt proceedings was not a spiteful act by Waste Control, but it was done for two reasons: to vindicate the authority of the court, to underscore that when the court makes an order, no matter who you are, you comply; and secondly, to protect the constitutional rights of his client.

Justice Arana has indicated to the Council that the court is not going to sit back and countenance disobedience to the order of the court, said Lumor.

For his part, Bradley told the media that he plans to deal with the dispute responsibly.

He said that “it’s a large debt, which requires a process to be put in place so that obligations can be met.”

Mayor Bradley said that the new residential garbage collection fee could help prop up the financial position of the Council, to better enable it to meet the payments to Waste Control.

He said that the Council is still finalizing the numbers with the Belize Water Services – the proposed collection agent. CitCo has been given a list of residents and households, and as soon as that is finalized, the new fee will come into play, making it easier for CitCo to deal with all debt obligations.

We asked whether the Council would consider selling assets to meet the payments. Bradley said, “We are looking at all options. We are going through an entire process, looking at this thing holistically… [However] we are not at the point right now where the City Council will need to sell off any of its assets.”

Some of those assets, as well as a large chunk of the City Council’s revenue stream, have been tied to the municipal bond, which is earmarked for the paving of many City streets with concrete.

We asked Mayor Bradley if he is concerned that the current debt dispute with Waste Control could result in a loss of confidence in the municipal bond.

He conceded that it does affect the credibility of the Council, and that is why they are saying they will act responsibly.

“The City Council over the last three years has met all its debt obligations,” Bradley asserted.

Attorney Young said that the disposition of the City Council is that, what they would have wanted to do is to settle once and for all – but have a global settlement which includes the sanitation contract, which the Council wants to revisit. This is why, he said, CitCo had made no payments towards the $2.3 million settlement.