Home Features Should we still claim only 3 miles of Territorial Sea in the...
Features

Should we still claim only 3 miles of Territorial Sea in the South? 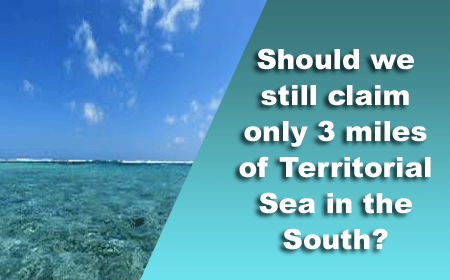 The Maritime Areas Act was the product of an important moment in the history of the Guatemalan claim to Belizean territory, when what was at stake was the recognition by Guatemala of Belize as an independent State. For years of negotiations with both PUP and UDP governments after independence, Belize had remained firm in not agreeing to consider land cession, but was prepared to make certain concessions in Belize’s southern waters in return for ending the claim and Guatemala recognizing Belizean sovereignty over all its land and island territory.

In January 1991, Jorge Serrano assumed the Presidency of Guatemala, and proved himself ready to seal the deal with great speed. By mid-August his government declared that “it recognizes the right of the people of Belize to self-determination” and two days later the Maritime Areas Bill was introduced in the House of Representatives.

On 5 September 1991 the Government of Guatemala announced: “the recent decision by the State of Belize to limit its territorial sea and its hereditary EEZ makes it clear to the government of Guatemala that [its] right to its own territorial sea on the coast of the Caribbean and to its own EEZ is guaranteed”. It then declared that “the Government of Guatemala expresses its willingness to continue direct negotiations with the independent State of Belize”. On 11 September, the governments of Belize and Guatemala announced their decision to establish full diplomatic relations with immediate effect and to exchange Ambassadors at the earliest opportunity.

The Maritime Areas Bill, which would have indeed caused Belize to limit its territorial seas in the south, did not survive as introduced, however, and in the final Act passed by the House no Belizean rights were relinquished.

The Maritime Areas Act states at Section 3 (1): “Subject to subsections (2) and (3) of this section, the territorial sea of Belize comprises those areas of the sea having, as their inner limits, the baseline of the territorial sea and, as their outer limits, a line measured seaward from that baseline, every point of which is 12 nautical miles from the nearest point of that baseline”.

Subsection 2 says that, subject to subsection 3, our territorial sea from Sarstoon to Ranguana shall be limited to three nautical miles, and subsection 3 says that the purpose of that limitation is to provide a framework for the negotiation of a definitive agreement on territorial differences with the Republic of Guatemala. It also states that any such agreement shall be put to a referendum by the electors for their approval or otherwise, and if approved by a majority vote, shall form the basis for the final delimitation of the territorial sea in the area of the sea from the mouth of Sarstoon River to Ranguana Caye. If not approved, however, the delimitation of the territorial sea in the said area shall be effected on the basis of international law.

The matter was clear and beyond doubt: the 3-mile limitation was not to come into force unless and until there was a definitive resolution of the Guatemalan claim to Belize and Belizeans had approved a settlement by referendum.

That was 1991, and we were still trying to put an end to the Guatemala claim to our territory by mutual agreement. After that there were many years of negotiations, of mediation through the Facilitation Process and of more negotiations, by which time Belize became convinced that it would be impossible to settle the dispute by agreement. Belize pushed hard for the matter to be submitted to the ICJ for final resolution, and Guatemala resisted this for years.
Finally, in October 2008, the two governments signed the Special Agreement declaring that they would submit the dispute to the ICJ. In other words, they would no longer negotiate or seek to arrive at any agreed settlement.

That was a game-changing moment, although not everybody registered this and applied it to relevant facts. Let us apply it to the Maritime Areas Act. The cited sections of that Act state categorically that “the purpose of the limitation of the territorial sea from the mouth of Sarstoon River to Ranguana Caye is to provide a framework for the negotiation of a definitive agreement on territorial differences with the Republic of Guatemala”.

That is the sole purpose. There is no other. When that purpose is removed by an act of State, therefore, the entire rationale for the limitation is removed, and the only rational thing to do is to remove the limitation. Clearly, that part of the MAA limiting our territorial sea has become obsolete, including the stipulation that any agreement resulting from the negotiations shall be put to a referendum. There won’t be any agreement, because there will be no negotiations.

Now if this was simply an exercise in cleaning up and clearing up the laws, removing obsolete stuff from the law books for neatness’ sake, I would not bother you with this. I would wait for the next general revision of the laws and let the draftsmen do their stuff.

But the fact that those sections of the law are still in force is hurting us, because many countries believe that the law limits our territorial sea to 3 miles from the Sarstoon to Ranguana, period, and Guatemala encourages that false interpretation and pretends to believe it too. The three-mile limitation has become inappropriate, misleading, and potentially harmful to the interests of State.

Indeed, we were advised by international lawyers almost 15 years ago that if we were to submit the delimitation to adjudication by arbitration or by a Court, then we would need to change the Act. And recall that the Special Agreement specifically includes our maritime areas.

I have explained these facts for a long time now, and argued for amending the MAA, and government has even announced that it has taken to Cabinet a proposal for a change in the law, but the law remains as it is, a ticking time-bomb under our pillars of sovereignty and territorial integrity.

What are we waiting for? Afraid that Guatemala would be upset by us claiming what we are due under the UN Convention on the Law of the Sea? But they themselves have robustly claimed all their rights, and can’t expect us to do otherwise. Nor would we be breaking any promises, for if the MAA was the fruit of a deal in return for Guatemala dropping its claim, well, it never did, and has now stated that it will not drop it by negotiation.

Are we concerned about the reaction of the international community? Our explanation would make it evident that this does not violate any agreement with Guatemala, that we have already mutually agreed that we will not negotiate our borders but rather leave it to the ICJ to determine, and that therefore those provisions of the Act have become redundant and misleading. We would merely be putting ourselves on the same plane as Guatemala, with each country professing the rights it deems to have. We would lose no international support for that action. On the contrary, it would give us another opportunity to explain that the Guatemalan government is purposely using this waiting period to foment increasing illegal incursions and to use its armed forces to repeatedly violate our sovereignty with the threat of force.

It would also let the Guatemalan government know that we are not asleep on watch as they continue to challenge our sovereignty and territorial integrity, that we are taking the initiative to protect what is ours, and that they are being called upon to respect and abide by international law in all respects.

We really should have amended the Act in 2008, but it is not yet too late. It has become more urgent, however, in light of Guatemala’s official insistence since then that the entire Sarstoon River belongs to Guatemala and is not even territory in dispute, like the rest of Belize.

The Maritime Areas Act should be amended NOW to simply say that we claim 12 miles of territorial sea for all our territory, and all the EEZ due us under international law. Hoy, no mañana.