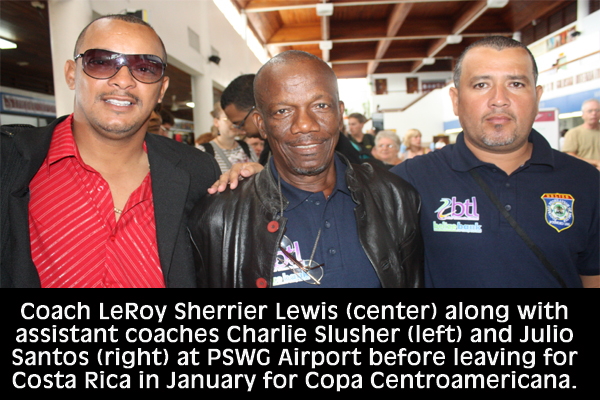 There were reports on the evening news yesterday, and at a press conference this morning at the Belize Biltmore Plaza Hotel in Belize City, Football Federation of Belize (FFB) President Ruperto Vicente made it official, confirming that he had received a letter of resignation from Mr. LeRoy Sherrier Lewis, who coached the Belize National Team to success at the Central American Cup in Costa Rica, where Belize secured a spot for the first time ever in the prestigious Gold Cup tournament to be held in 13 American cities in July of this year.

Optimistic fans were looking forward to another fine showing for the Belize National Team under the able guidance of coach Sherrier Lewis, who has won the hearts of Belizean players and fans on both occasions when he has coached our national team.

Back in 2001, coach Lewis and Belize had almost upset Guatemala in the Central American Cup, with Guatemala equalizing the game in injury time with a controversial penalty. Then FFB President Dr. Bertie Chimilio had rewarded Lewis’ performance by firing him after the tournament, ostensibly for Lewis’ criticisms of the officiating after the match.

Following the deposing of Chimilio in the FFB elections of March, 2012, and with the Central American Cup looming in January of this year, Lewis had contacted new FFB President Ruperto Vicente and offered his services to Belize. The rest is history. Sherrier Lewis took up the post as national team coach in early October of last year, and in January of this year at the Central American Cup in Costa Rica, Belize qualified to the Gold Cup.

But there was mischief at the Central American Cup in January of this year, and coach Lewis had then reportedly expressed his intention to step down from the coaching post, following the appearance of a letter attacking his character.

That had all been cleared up, according to the FFB president, and they were about to finalize the details of coach Lewis’ contract; indeed Vicente was waiting for Lewis at Love FM studios on Wednesday, when he received the surprising news.

Vicente said he immediately visited the coach, who confirmed the news, and informed Vicente that he had left a letter (in Spanish) at the Federation’s office addressed to him and explaining his decision.

In the letter, which, with Lewis’ approval, was provided to the media along with a translation, coach Sherrier Lewis said his decision was “for personal reasons,” citing the fact that he is “almost 70 years old,” and that he does “not have the strength, nor the motivation” to continue in the post of head coach. But, despite the diplomatic nature of his letter, coach Lewis did give some clues to some of his concerns that might have aided in his decision to step down and “return to my country and enjoy the rest of my life along with my loved ones.”

Sherrier Lewis, who had developed a very good relationship with president Vicente, advised the FFB president in his letter that “there must be some attention to the criteria of some of the National Team Committee members, who are …obstacles to the good work that you are accomplishing at the Football Federation;” and insinuated some ulterior motives of others when he lamented not being able to accompany Vicente to the draw in Chicago, saying that “… this is the price we must pay, we who work with honesty and seriousness.” And he warned Vicente that “…the struggle is going to be hard, to be able to bring about the changes necessary so that Belizean football can continue to grow.”

There is a tinge of sadness and regret in Sherrier Lewis’s letter, but no bitterness, as he gave advice to Vicente on the way forward, and begged him to “Greet all members of the football family of this beautiful country for me, and I beg them to continue supporting football in all its forms.” Indeed, his affection for Belize is evident as he said, “I want to make it clear that there are no offers of any jobs to me in any part of the world, and if one existed I would not take it, out of respect to this beautiful country…”

And in his parting shot, Coach Lewis thanked president Vicente “for your unconditional support on this my second time in this beautiful country. Don’t despair and together we achieved something important.”

For his part, the FFB President said he is left no choice but to move on, and continue the job of preparing the national team to meet its commitment at the Gold Cup in July. For the sake of continuity, on Mr. Lewis’s recommendation, assistant coach Charlie Slusher will be holding the head coach position. He will be assisted by Julio Santos and Kent Gabourel, while the Executive considers various applications from certified international coaches for the national coach job.