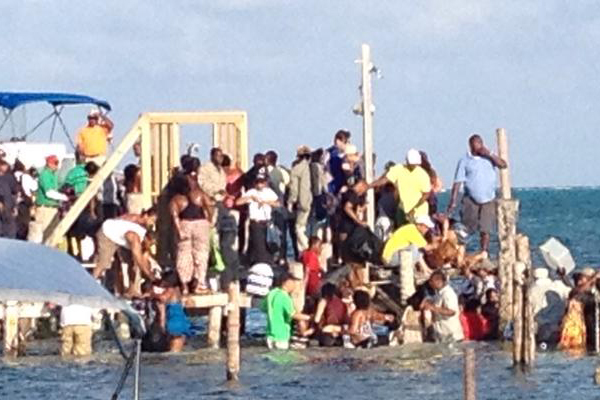 A melee involving civilians and police officers erupted in Caye Caulker this past Saturday in the wake of an incident in which a group of passengers who were returning home from the island took an unexpected dip in the Caribbean Sea after a crowded pier on which they were standing collapsed and the vacationers and their luggage found themselves in water, over which, just a few seconds before, they had stood.

Scores of travelers – which included tourists and Belizeans visiting from the Diaspora – were waiting to board the last scheduled San Pedro Belize Express water taxi around 5:00 p.m. when disaster struck.

Fortunately, the water beneath the pier was shallow, and there were no reports of any major injuries in the aftermath of the unforeseen incident which, according to the pier’s owners, San Pedro Belize Express (SPBE) Water Taxi, was caused by “overwhelming crowding.”

The water taxi operating company issued a press release today in which they expressed their sincerest apologies and said, “The SPBE team, Police, Port Authority and Coast Guard that were present made every effort to enforce safety and crowd control procedures to ensure passengers were boarded safely and appropriately by vessel.”

The company maintained that it had warned passengers to wait on the beach to “improve accessibility and ease the stress on the bridge; however, this request was met with rebuttals, as the crowds continued to move onto the bridge against the directives of the authorities resulting in a portion of the bridge buckling under the pressure.”

The release added that the company is “making every effort to fortify its ports and implement additional safety features to ensure this incident is not repeated.”

After the incident had occurred, we understand that an alternate pier – belonging to the Caye Caulker Water Taxi Association – was then utilized to move the civilians off the island, but that only made matters worse, as we were told that there were all kinds of jostling and fighting among the massive crowd of anxious passengers.

Police were soon called to diffuse the situation and enforce crowd control, but they soon became involved in the brawl after they were reportedly met with resistance and had to resort to the use of force as a result.

A video which was posted on social media shows at least three police officers, one in civilian clothing, physically restraining an individual by putting him in a chokehold.

Unconfirmed reports are that the man, reportedly identified as Gregory Myers, was behaving in an unruly manner and may have aggressed the officers first, but we were told that Myers was merely trying to maintain order among the chaos when police tried to arrest him, which led to a struggle on the ground between Myers and the officers.

According to our reports, he was later charged with three counts of assaulting a police officer and resisting arrest.