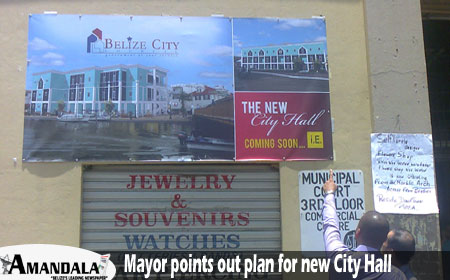 BELIZE CITY—For the past 22 years, the Commercial Center has stood in the heart of Market Square in downtown Belize City, but while the site exists as a landmark which boasts historical significance, natural elements and wear-and-tear have cast the complex into a state of dilapidation, and the building will now be subject to much needed renovation in the coming weeks.

Belize City Mayor, Darrell Bradley, and newly appointed Taiwanese Ambassador to Belize, Benjamin Ho, held an onsite groundbreaking ceremony today which proposes a complete overhaul of the building as part of an effort to rejuvenate the downtown area into a “beacon of transformation,” especially since it is slated to be the new headquarters of City Hall, the municipal administrative body.

In his remarks, Bradley said, “The renovation of this building will cost the municipality two million dollars. It is resources that could have been spent elsewhere, but it is important to us as a municipality to signal our commitment to the restoration and redevelopment of downtown Belize City as being the heart of our community. This project, I hope, will signal the reinvigoration of our downtown urban landscape.

“The second and third floor will become the new City Hall. We have seen that Belize City is outgrowing the space of our City Hall on North Front Street. It is a space which is cramped. It is a space which is in need of renovation. It has historical significance, so that that North Front Street structure will remain a municipal complex and we are already talking about plans to turn a portion of the building into a city museum.” 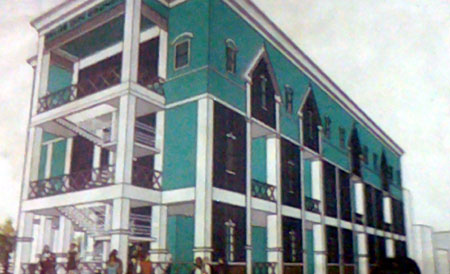 According to Bradley, the works are part of a large scale initiative named “The House of Culture and Downtown Redevelopment Project”, funded by the Taiwanese government and implemented by the Belize Tourism Board (BTB), through which there will be renovations done to the House of Culture, the building of a botanical garden, the adding of signage in the downtown area and the improvement of connectivity in the entire downtown.

About a year ago, Battlefield Park, another landmark in the Old Capital, was renovated, and now, by means of the renovation of the Commercial Center, Bradley is trying to bring life and business back to what had become a rundown superstructure with a cluster of metropolitan offices and crop vendors at its base in order to complement the ongoing city-based infrastructure works, as well as the overall appearance of the downtown area.

Bradley told us that he has met with the 13 vendors who occupy the ground floor to assure them that they will be getting back their spaces when the renovations are complete, and that the rental costs will not be altered.

“Nobody was forcibly evicted. This was something we’ve been working on for the last 8 months. We have met with the vendors before, we had showed them some of the design concepts that we were toying with, [and] we tried to work out some of the issues with the vendors. A lot of their concerns had to do with the timeframe of the project because they want a short possible time and they were asking in relation to any changes in their rental and trade license, and I assured them that the rent will remain the same, notwithstanding the significant expense we’re bearing to renovate the building”, he informed.

The Mayor said that, in the meanwhile, the vendors have been relocated to other parts of the city until the works are completed.

He also mentioned that there is no cause for concern in regards to traffic congestion, since the renovations will be concentrated in the interior of the building.

The renovation process will start in September and the project is expected to be completed in 8 months. The project is being handled by International Environments Limited.