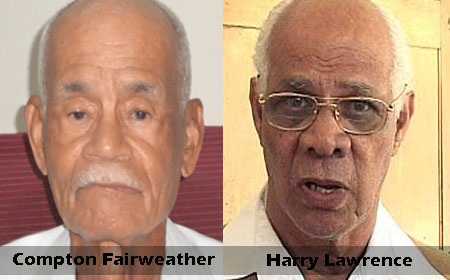 BELIZE CITY, Mon. Oct. 5, 2015–Belizeans head to the polls on November 4 to elect a national government, one year and six months before elections are due, and the one issue that continues to remain prominent in the national consciousness is the unfounded claim of Guatemala to half of our territory.

Compton Fairweather, a pioneer and patriot who was given the Order of Belize in 2009 for his service to the Belizean community in New York, appeared on KREM’s Sunday Review this past Sunday, and took serious issue with the editorial for this week’s The Reporter newspaper, of Sunday, October 4, 2015, accusing it of giving “comfort to the enemy.”

The Reporter is owned and published by Harry Lawrence, who, in 2011, was appointed Ambassador to the Vatican by the ruling United Democratic Party. The newspaper currently has a vacancy for an editor.

“The contents of this editorial can easily be used by hardliners in Guatemala who could claim: ‘Look, even one of their leading papers is saying that Belize would be aggressing Guatemala if the forwarding base is built in that area,’” Fairweather said.

The offending paragraph, according to Fairweather, reads, “Even though Belize has a legitimate claim to Sarstoon Island, going there to physically take control would be regarded as an act of aggression in many countries, certainly in Guatemala. At the United Nations there is no chance that the Security Council would approve of such unilateral action, which is likely to endanger the peace.”

Fairweather also took umbrage with the wording of the editorial, claiming that there are some fundamental errors in it that cannot be bypassed. For example, said Fairweather, “It is wrong to say that Belize ‘has a legitimate claim;’ we don’t have a ‘claim;’ we own the place based on three fundamental principles of international law.

“First, we own it by occupation for over one hundred years. Second, we own it based on the 1859 Boundary Treaty, which is enshrined in our Constitution and defines our borders.

“Thirdly, ownership is also verified by a UN principle (called thalweg) grounded in the Helsinki Rules on Trans-boundary rivers which defines the deepest point in the rivers Sarstoon and Rio Hondo.”

Fairweather also said that a fourth principle could be asserted, namely that of conquest, because of the Battle of St. George’s Caye in 1798.

Fairweather also questioned the editorial’s position that “to physically take control would be regarded as an act of aggression.  “

How could that be, Fairweather asked, as he noted, “how can you be an aggressor in your own territory? Resolution 29 of the UN defined what aggression is. And if you go according to that Resolution, it is Guatemala that has been aggressing Belize.”

Article 1 states that, “Aggression is the use of armed force by a State against the sovereignty, territorial integrity or political independence of another State, or in any other manner inconsistent with the Charter of the United Nations, as set out in this Definition.”

“Aggression means you attack someone outside of your border … how can you aggress a foreign territory from your own territory? Aggression, according to international definition, is when you go into someone else’s territory to aggress them, but not in your own territory.” Fairweather said.

“In light of the recent incident at the Sarstoon, when Guatemalan gunboats rammed Belizean civilians who were traversing it, it is in fact the Guatemalans who are being aggressive. Going there to take control is considered aggression in international law,” Fairweather said.

Fairweather wondered if the Foreign Ministry will ask The Reporter to offer a retraction because of the implications of the article diplomatically. He said that most governments use editorials in local newspapers to gauge the pulse of the opinion leaders in a country. The contents of this editorial could be misunderstood and therefore the Ministry of Foreign Affairs should ask The Reporter for clarification or for an outright retraction of the misleading piece, Fairweather said.

“If we were claiming what is not ours, then it would be aggressive. How could we be breaking the peace when the stated objective of the forwarding base is to ensure that illegal activities such as narco-trafficking, illegal fishing and logging and human trafficking are being policed … the proposed use was never stated as a military one, according to Commandant of the BDF, General David Jones,” Fairweather said.

“Is he saying: Don’t build a base any at all in that area? What about the unfinished base in Hunting Caye? Should that also be left unfinished to avoid offending the Guatemalans?” he questioned.

Again Fairweather asked, “What does the OAS have to do with the Forwarding Base at Sarstoon when their focus is in the Adjacency Zone, which does not include the southern border?”

He added that, “The OAS would never make any statements on these incidents because they have no authority, since their focus is primarily the management of the ‘Adjacency Zone’”.