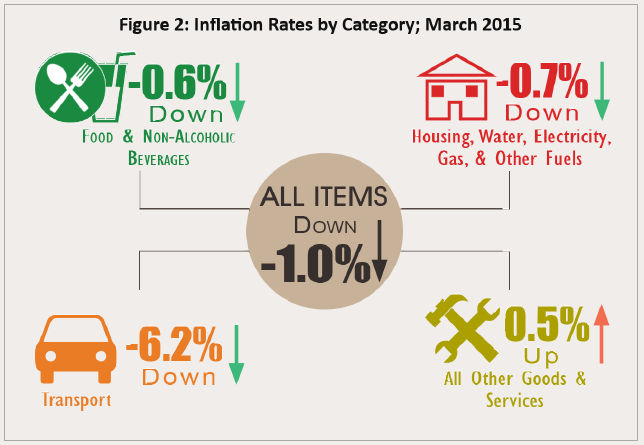 BELIZE CITY, Thurs. Apr. 30, 2015–A substantial fall in the price of fuel products continues to drive down the inflation rate, which fell again from 1.4% last March to -1% this March.

“This indicated that, on average, the goods and services typically purchased by Belizean households, were 1 percent cheaper than they were one year ago,” explained a release issued by the Statistical Institute of Belize (SIB) on Wednesday.

In fact, Belize’s inflation rate has been below zero since last December. The last time the country saw sustained price dips was back in 2009.

The price of liquefied petroleum gas (LPG) used for cooking, as well as the prices of gasoline and diesel were down by nearly 30% over the same period last year. For example, the average price for LPG was down by about $33, from $126 last March to $93 this March, the SIB said.

The institute added that international airfares, also within this category, were about 11 percent lower than during the same month last year.

However, in the ‘Housing, Water, Electricity, Gas and Other Fuels’ category, a marginal increase in home rental prices was offset by a 20.7 percent decline in electricity rates which came into effect this, January.

Food prices were down 0.8 percent, with price falls recorded for eggs, red kidney beans, and various fresh vegetables, including cabbage, onions, and carrots.

The SIB also released trade statistics, which indicate that for March 2015, Belize’s total imports were valued at $175.1 million, up by 7.5% or $12.2 million over last March. The country was importing more motor vehicles, electrical insulators and plastic molding machines, as well as more construction supplies.

The trade gap continues to widen and Belize’s import bill almost quadrupled the value of its exports.

Overall, merchandise imports for the first quarter of the year, January to March 2015, totaled $489.6 million, up by 10.7 percent or $47.4 million over the same period last year. This contrasts sharply against the value of the country’s exports, which stood at $134.69 million for the same period.

For March 2015, Belize’s domestic exports totaled $55.7 million, a $4.9 million or 9.5 percent increase compared to last March. However, domestic exports were down for January and February 2015, resulting in an overall decline in the value of the country’s exports for the quarter from $142.16 million for January to March 2014, or a total decline of $7.47 million for the first quarter.

According to the SIB, there were no shipments of crude petroleum for the month of March 2015.