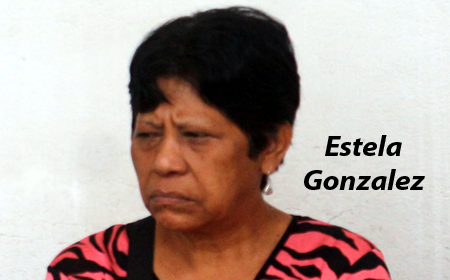 BELIZE CITY, Tues. Feb. 23, 2016–A naturalized Belizean woman of Honduran origin, the first person to be convicted of human trafficking at the Supreme Court, was spared the minimum prison time of eight years stipulated by the Trafficking In Persons Act of 2013, but was ordered to pay over $70,000 in fines forthwith, by Supreme Court Justice Adolph Lucas, who sentenced her this afternoon.

The convict, Estela Gonzalez, 64, sat in the prisoner’s dock leaning on her left side to hear in the Spanish, the court interpreter’s low voice repeating the words of Justice Lucas, as he read his judgment in the almost packed courtroom.

On February 10, a jury of nine returned a guilty verdict in respect of one count of human trafficking against Gonzalez, who had turned a 15-year-old Honduran girl into a sex slave at her club, Temptation Bar, located around Mile 10 on the George Price Highway.

The court held a mitigation hearing on February 18, during which two doctors, Dr. Fernando Cuellar and Dr. Javier Novelo, testified about Gonzalez’s failing health. Gonzalez is suffering from chronic diabetes and hypertension. The day before the mitigation hearing Dr. Novelo had treated her for an anxiety attack at the Belize Central Prison. Both doctors testified that Gonzalez’s health condition was unsuitable for the conditions at the Belize Central Prison, which does not carry the necessary medication that she needs on a regular basis.
In her own mitigation plea, Gonzalez, speaking from the prisoner’s dock, told the court she “did not know that having a female was a problem.”

“I am sick, and humbly asking for your forgiveness.” Gonzalez added that the food at the prison is not good for her health and, “if I remain there, I may die.”

Senior Counsel Ellis Arnold, who was brought in by Gonzalez’s defense team, attorneys Leo Bradley Jr. and Kevin Arthurs, to make a mitigation plea for her, had pointed out to Justice Lucas that under the Indictable Procedures Act the court can impose a non-custodial sentence. Ellis, however, described the offense for which Gonzalez has been convicted as “reprehensible,” and he suggested an appropriate fine and restitution to the victim. Arnold told Justice Lucas that “if you impose a prison sentence that would be tantamount to a death sentence,” and that Gonzalez had already made attempts to rehabilitate herself from the type of business and is now gainfully employed as the manager of a meat shop in Ladyville.”

In passing sentence, Justice Lucas described Gonzalez’s act as “a crime which reduces the victim to a sexual slave,” and the victim’s evidence in court and the impact statement were taken into consideration in the sentencing.

Justice Lucas fined Gonzalez $30,000 and ordered her to pay forthwith; in default, she would have to spend one year in prison.

In addition Justice Lucas noted that the victim has been in the care of the Department of Human Services, so he ordered Gonzalez to pay $28,000 to the Government of Belize for taking care of the victim.

For the victim, who is still in the care of the government, Justice Lucas ordered Gonzalez to pay $588 for lost income and $15,000 as restitution.

“All those figures you must pay before you leave from here,” Justice Lucas told Gonzalez.

Before Gonzalez left the courtroom, family members and one of her attorneys left the Supreme Court and headed over to the Magistrate’s Court, where the money was to be paid.