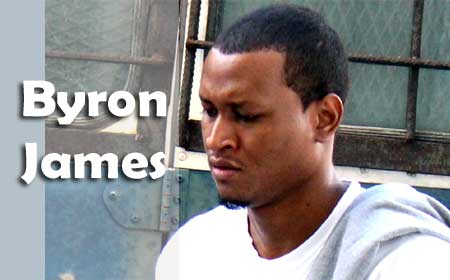 The allegation against James is that on Thursday, February 16, 2017, the same day he was convicted of the murder of Frank Vasquez, as he was being led away along with other prisoners he rushed over and attacked Nembhard-Flowers, who was photographing the prisoners. James hit her in the face, causing a wound to her nose.

Nembhard-Flowers was treated at the Karl Heusner Memorial Hospital, where Doctor Aline Gonzalez classified her injury as harm.

Nembhard-Flowers filed a report at the police station and requested court action. After waiting four months for the police to charge James, she sought the assistance of the Director of Public Prosecutions.

The question of bail for James did not arise today because he is a convicted murderer who is awaiting sentencing for the murder of Frank Vasquez, who was shot multiple times on May 5, 2012, as he walked out of his yard on Neal Pen Road, Belize City.

Vasquez succumbed to his injuries on May 9 while undergoing treatment at the Karl Heusner Memorial Hospital.

One year after James’ murder trial concluded before Supreme Court Justice John “Troadio” Gonzalez, the judge handed down his guilty of murder verdict.

James is scheduled to return to court for the harm charge on July 11.