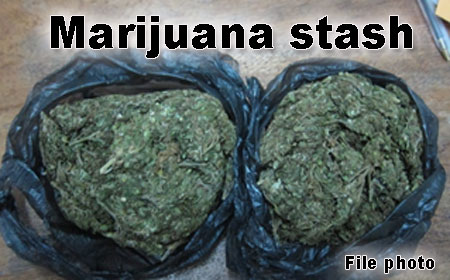 BENQUE VIEJO–A Belize City cop and a Benque Viejo mason have been remanded to the Belize Central Prison until October 15 on charges of drug trafficking after they were busted with 1,728 grams (about 3.8 pounds) of weed and contraband liquor.

Benque police said that they were conducting an anti-crime patrol at about 8:00 Tuesday night along the banks of the Mopan River in Benque Viejo when they saw two men coming from the riverside with some plastic bags.

When the two men saw police, they dropped the bags and tried to run, but police quickly captured them and took them back to the spot where they had left the bags.

Police said that they identified Virgil Perez as a police constable, and the other man as Melvin Ruiz, 36, a mason of Benque Viejo del Carmen.

As a result, the cop and the mason were arrested and charged with drug trafficking. They were taken to the Benque Viejo Magistrate’s Court on Thursday and were remanded for the drug trafficking charge.

The men also will be charged by the Customs department for the possession of contraband liquor, at a rate of three times the value of the goods.