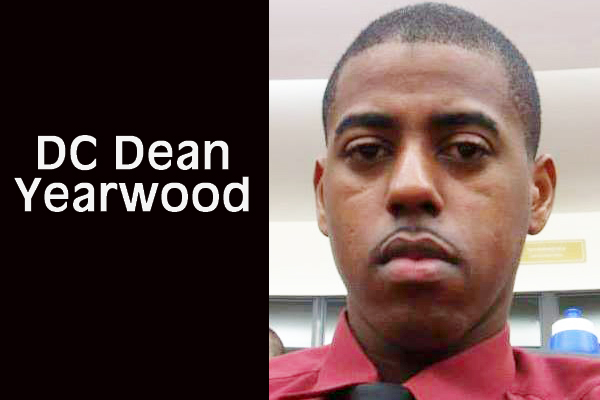 Yearwood was shot in the back and died on the spot. Incredibly, he may have been shooting in the air, possibly to frighten a thief who reportedly had attacked and tried to rob him, when he himself fell victim to shots from his fellow officer’s firearm.

Family members who have been calling the KREM WUB morning show claim that Yearwood fired four shots into the air, and not at his assailant. They also claim that 20 seconds of a surveillance tape from a nearby business camera are missing.

The assailant who attempted to rob Yearwood, later identified as Brian Vasquez, 21, was also shot in the back. Vasquez and Yearwood were taken to the Karl Heusner Memorial Hospital, where Vasquez underwent surgery. Yearwood was declared dead on arrival at 2:05 a.m. and taken to the morgue.

Grant fired about 11 shots from his 9 mm handgun, hitting the man who was armed with a .38 Special revolver, later identified as Constable Yearwood, in the back. A second man was found bleeding from a gunshot wound in a yard just a short distance from where Yearwood was found, police say.

Police claimed that Constable Grant did not know that the man armed with the .38 revolver was a policeman, and that he was responding to what he believed was an armed robbery.

Information to us is that Yearwood was walking on the sidewalk in front of the Swift’s residence at the corner of Nargusta Street and Central American Boulevard when he was attacked. He managed to take out his police-issued service revolver and either fired in the air or at the attacker, and that was when he came under fire from Constable Grant.

Yearwood’s family members are incensed that Commissioner of Police, Allen Whylie, has announced that the shooting that caused Yearwood’s death will not be considered a criminal act. Whylie said that there is no evidence that Constable Grant had intended to kill Constable Yearwood

Whylie made his remarks at a press conference that was called by the police high command at about 10:30 on Monday morning at the Racoon Street Police Headquarters.

Commissioner Whylie said that after the scene was processed, one .38 Special Revolver and four .38 expended shells were found next to the body of Dean Yearwood. A .9mm Beretta pistol loaded with five .9mm live rounds was retrieved from Glenn Wayne Grant. Also, (11) .9mm expended shells and a projectile fragment were found in an area in front of Publics Supermarket.

The Compol announced that Constable Grant has been placed on administrative leave, and counseling has been offered to him. Although the incident does not have the characteristics of a murder, because a person is dead a criminal investigation must be carried out, said Whylie. He added that after a thorough investigation is conducted, the file will be sent to the Office of the Director of Public Prosecution for advice and direction.

The Commissioner said that as a result of the police officer’s death he has directed the Commandant of the Police Training Academy to review the weapons training syllabus and to find ways for an off-duty policeman to identify and recognize a fellow officer.

When pressed by the media as to why 11 shots were fired by the off-duty policeman, Whylie said that people react to situations differently. He said he would not pass judgment, but would leave it to the DPP. He said that this is the first time that such a tragedy has occurred, and his department must learn from it.

Yearwood’s family, however, is not happy. They said that while counseling is being offered to Constable Grant for shooting their loved one, they believe that nothing will come out of this even though an excessive number of shots (11) were fired.

For his part, Inspector Fitzroy Yearwood, former Police Press Officer and a cousin of the deceased, on Wednesday morning called the KREM WUB Morning Show, and said that while the policemen who dealt with the body of PC Yearwood on the scene were not able to identify him, he was able to personally establish the identification of his cousin before he was taken to the morgue.

So he was at a complete loss to explain how the body was placed at the morgue as a “John Doe” when he had already identified the deceased as a police officer to the officers present at the scene. The Inspector said that the officers were negligent for not returning to the morgue and making the proper entry, to show the identity of the fallen policeman.

Inspector Yearwood said that he was working earlier that night and he observed certain things which he will discuss with the officer in charge of the investigation. He honestly believes that his family will get justice. He said that he is putting his trust in his fellow police officers to deliver that justice, and he is encouraging those who know or saw something to make or write a formal report.

He was also adamant that a policeman should know his fellow police officers.

“There are some officers that passed out in April. I am a 17-year veteran in this department and I make sure that I get to know new officers, whether they are detectives or uniformed police. And if we work in the same division – I don’t see how you can say that you don’t know each other. That’s all I am saying,” said the veteran cop.