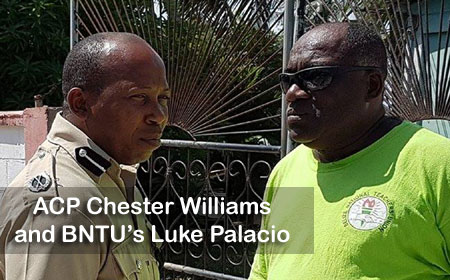 BELIZE CITY, Mon. Oct. 3, 2016–By 10 this morning, several teachers had gathered outside the KREMANDALA compound on Partridge Street in support of their president, Luke Palacio, president of the Belize National Teachers Union, as he spoke to the media about the ongoing industrial action against the government for refusing to accede to eight proposals as a part of “It’s not about the 3 [per cent salary increase]; it’s about the country” campaign.

Palacio and his teachers, however, were shadowed by at least four police officers who took up positions on the opposite sidewalk, across the street from the compound.

The presence of the police was perplexing, because the BNTU members numbered about six people, and there was no violence, or threat of violence coming from the teachers.

The Police Department later released a statement confirming that police officers had been deployed at various schools to protect teachers and students who had shown up during today’s protest.

According to the statement, the police would also seek to protect the teachers engaged in industrial action from anyone who may be against their agenda

“In addition, we have also posted officers on Partridge Street in the vicinity of KREMANDALA as we understood that members of the BNTU executive were to appear on KREM Radio, after which they would congregate with supporters,” the statement added.

When they were first asked their reason for parking themselves so conspicuously and unnecessarily in front of the KREMANDALA compound, however, where BNTU president Luke Palacio and a small number of union supporters were gathered (Palacio was also giving interviews to the press), they denied that they were there to “protect” Palacio and the other teachers.

After their presence stirred concern on the airwaves and on social media, ACP Chester Williams, Commander of Eastern Division South, arrived on Partridge Street to inform us that he had deployed his men in the area.

“The posting of the police officers out there has nothing to do with the government or the Prime Minister. I, as Commander of Southside Belize City, took that initiative and put the officers out there to ensure the safety of our teachers,” said Williams.

“The teachers historically, have been very peaceful protesters, they have never tried to agitate problems and we do not anticipate anything from them where violence is concerned, but we must focus on persons who may want to use this opportunity to try and create some kind of havoc in our country,” Williams added.

BNTU President Luke Palacio told our newspaper that he had initially felt intimidated by the presence of the officers outside of the KREMANDALA compound, but if he had known they were there for his safety, he would not have felt that way.

Palacio said his efforts and those of his teachers were not politically driven, but may not be supported by the United Democratic Party and its supporters.

“We are not about destroying this country, contrary to what the Prime Minister said; we are not on a destructive crusade,” said Palacio.