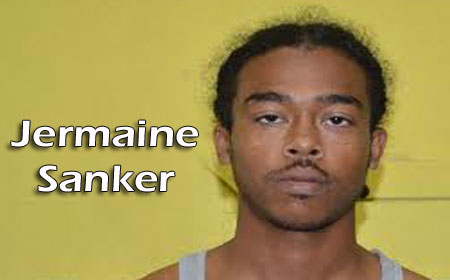 COROZAL TOWN, Thurs. Feb. 12, 2015–Another fugitive who has been on the run has handed in himself in to police. The most recent man on the run to surrender himself to police is Jermaine Sanker, 25, an unemployed resident of the Skeleton Town area of Corozal Town. He was wanted by police for a series of armed robberies, and theft.

On December 5, 2014, Corozal police had issued a warrant for Sanker on charges of aggravated robbery and attempted robbery, but he had managed to evade police and had been on the run for just over two months.

However, at about 11:30 Tuesday night, he contacted Superintendent Mark Flowers, Commander of the GSU, and an arrangement was made to hand himself over.

Police report that on Tuesday night, Superintendent Flowers travelled to Corozal Town, and on his arrival, Sanker came out of hiding and went to him. The GSU Commander then took him to the Corozal Police Station, where he handed him over to Corozal Police, after which Sanker was formally arrested and charged with multiple counts of robbery and aggravated assault with a firearm.

Sanker remains in police custody, pending further investigation and identification parades, because additional charges will be brought against him, after which he will be arraigned at the Corozal Magistrate’s Court.

Corozal police alleged that on the night of December 5, Jermaine Sanker and two of his partners went on a crime spree in Corozal, during which they committed a number of armed robberies.

Police said that Juan Qing Wu, 40, a businesswoman of Calcutta, Corozal District, reported that at about 7:30 on the evening of Friday, December 5, 2014, three men with cloth covering their faces entered her store, the Community Supermarket. One of the robbers, who was armed with a pistol, pointed the gun at her and demanded money, while another bandit went into the area of the cash register and stole $1,000 that was in the drawer, she said.

The robber also stole her Samsung Galaxy cell phone, after which the robber holding her at gunpoint hit her on the head with the gun butt, causing her to fall. The three bandits then ran out of the store and escaped on bicycles through a back road leading to the village of Xaibe, in the Corozal District.

Jerson Chan, 19, a farmer, told police that he was just exiting the Community Supermarket when the three men entered the store, with their faces covered with cloth.

As the masked men entered the store, one of them pulled out a gun and fired a number of shots in the store, he said.

Chan reported that he ran from the shop and was heading home, when, about three minutes later, he saw the same three men riding after him on bicycles, and one of them stopped him. One of the robbers walked up to him and demanded money and his phone.

Chan reported that he recognized the robber as Jermaine Sanker, who had been a student at the same college that he attended.

According to Chan, Sanker then lifted his shirt and pulled out a pistol from the back of his pants and pointed it in his face. Chan then handed over his cell phone, valued at $185, to Sanker, and all three of the thieves rode off on the Calcutta back road that connects the village to Xaibe Village.

Corozal police then began a hunt for Jermaine Sanker for the crime of aggravated robbery.

Police said that shortly after both the store and Chan had been robbed, that same night, a 17-year-old young man was in Xaibe when three men riding on bicycles approached him, and one of them pulled out a gun and pointed it at him, demanding money.

The boy, however, shouted for help and the men sprinted away on their bicycles. The youth, however, identified one of the men as Jermaine Sanker.