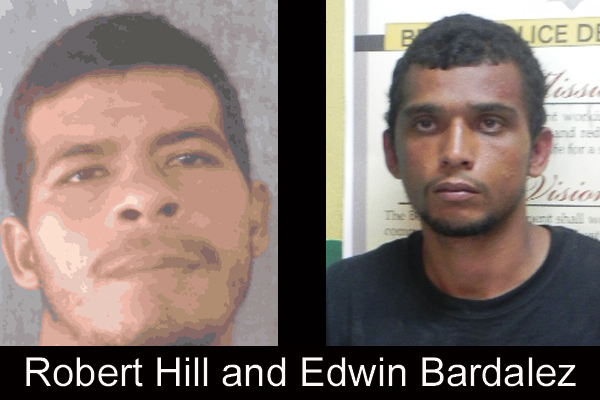 Two robbers on the run from Corozal police after stealing a taxi driver’s car and brutalizing him with the butt of a gun were captured in Orange Walk at about 6:30 yesterday morning, Tuesday. The men were travelling in the car, which had been stolen in Corozal, when police apprehended them.

Police say that the two robbers are Edwin Bardarez, 26, a construction worker of Belize City, and Robert Hill, 36, a mechanic from Alta Mira, Corozal. When police approached the men to arrest them, Edwin Bardarez allegedly pointed a gun at them, but did not fire it.

When police searched the two men, they found with them a Belize passport in the name of Gregorio Monteroso, and a black Motorola cell phone with calling number 607-1962.

The men were taken to the Orange Walk Magistrate’s Court today and they were remanded at the Belize Central Prison until August 28, when they will be returned to court.

Police said that yesterday morning about 6:30, an observant police officer in Orange Walk Town was able to spot a Corozal taxi that had been reported stolen in Corozal, since it was a vehicle that he knew. The car was being pushed by two men, one of whom he also knew. He then approached the two men to question them about the car, but one of the men pulled out a gun and pointed it at him until he backed away.

A mobile patrol that was in the area, however, intercepted the men and captured them.

Police said that about 10:00 p.m. on Monday they went to the Corozal Hospital, where they saw Corozal taxi driver, Gregorio Monteroso, 51, of Paraiso Village, lying on a bed with his face swollen and blood coming through his nose.

Monteroso told police that about 8:30 p.m. on Monday, July 8, he was in his taxi on 7th Avenue at the taxi stand when two men approached and wanted him to take them to Finca Solana, Corozal. He agreed and took them.

When they arrived at Finca Solana, however, the men ordered Monteroso to take them to Chula Vista, and again he complied.

Monteroso said that while driving to Chula Vista, one of the men who was sitting in the back seat beat him on the head with a gun butt, causing him to stop. The men then took him out of the car, and beat him in the face with the gun butt.

Orange Walk police were alerted by their Corozal counterparts, and at about 6:30 yesterday morning, the car, which had broken down, was found in the possession of Hill and Bardarez in Orange Walk.