Home Headline Corrupt – from the very top to the very bottom!!!
Headline

Corrupt – from the very top to the very bottom!!! 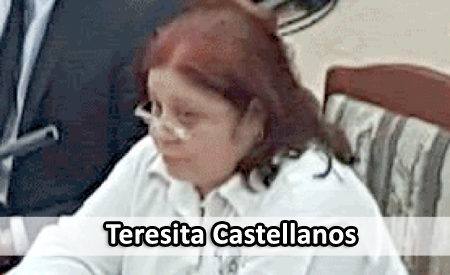 BELMOPAN, Cayo District, Wed. Feb. 15, 2017–In 2011, Teresita Castellanos, a public officer of 30 years, was transferred to the Immigration Department, where she served for three years as Finance Officer. However, she claimed that she was “thrown” out of the department in 2014 by former CEO Candelaria Saldivar-Mortis.

Castellanos appeared in front of the Senate Select Committee today, Wednesday, and said she made every effort to fight the transfer, because she wanted to remain in the department until the Auditor General’s report was completed.

That report, released last year, claimed that it was under Castellanos’ watch that revenues were collected for 8 visas issued without visa stickers. According to Castellanos, it was not her fault; instead, it was a culture of corruption among Immigration officers and a lack of political will by the Ministry which allowed for these irregularities to occur.

However, she claimed that efforts were made to combat the corruption.

The Immigration Department has an entrenched culture of corruption and hustling…milking the cow, as we say, from the very top to the very bottom of the ladder.

Castellanos was today allowed by the committee to read a troubling analysis of her observations while she was at the Department.

She began, “The Department, headed by the Acting Director and her small team, made many attempts to stop the rampant malpractices that plagued the department. The job to fix the problem was too difficult to accomplish, the reason being was the often non-support from our ministry. We considered ourselves orphans of the ministry…”

She continued, “The department became important when a document needed approval. We became infamous with scandals, but even so, the support was just not there. Yes, the culture was there, is there, but there are persons who are trying to pretend they don’t know which culture exists at the department.”

Castellanos explained, “I may not have another opportunity to say what I have to say to the Belizean people. Some may even ask what gives me the right to talk. Today, I do. I was in the belly of the beast for three years and am among others named in the Auditor General’s [Special] Report. This gives me the right to say the following.”

“The Immigration Department has an entrenched culture of corruption and hustling…milking the cow, as we say, from the very top to the very bottom of the ladder. No politician can force any public officer to do illegal acts when performing our jobs. And if we do, then we have to face the same consequences as the politicians, for the Belizean people are demanding justice,” Castellanos asserted.

However, she explained that, “There are a few good, honest and dedicated officers, but there were not enough trusted staff to oversee the daily operations of the sections and at the district offices and border stations. The call for help was not answered, and this inquiry is the result.”

“The resistance to follow instructions given by the Head of Department and to adhere to the Government regulations was frustrating. The culture of treating civilian public officers as intruders…The culture of Immigration officers working against the civilians or any other officer who was doing the right thing. They are a fraternity. The mentality [was] touch one, touch all,” she revealed.

Castellanos read, “I would like to go further and state that the resistance by some officers was beyond my comprehension. At one point, some of us were fearful for the life of Acting Director Maria Marin. Why? Because she was doing her job; she was strict, because she was putting things in place for the hustling to stop.”

She warned, “This is just a part of the story regarding the Immigration Department. The corruption behind closed doors…the intricacies…the lies and attempts to cover up wrong doings…a department of ill repute…”

She ended her letter, “I will be hated for this, but I am under oath today and the truth must be told.”