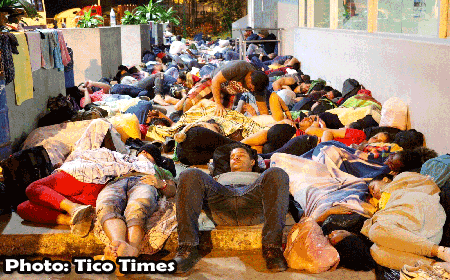 BELIZE CITY, Tues. Dec. 8, 2015–An official response is expected from the Government of Belize today, Tuesday, on whether it will allow 3,000 to 4,000 Cuban migrants who are determined to land on US soil, to take advantage of that country’s “wet-foot, dry-foot” policy, which provides special privileges for Cubans to legitimize their status in the US, even if they arrive without papers, but which turns them back to Cuba if they are detained at sea.

The migrants are currently stuck in Costa Rica after Nicaragua, last month, deployed its military to stop their passage through that country.

Last week, Guatemala denied a request from Costa Rica to have the migrants pass through that territory, and now they have turned to Belize.

After Friday’s sitting of Parliament, Prime Minister Dean Barrow told journalists that he had requested written documentation from Costa Rica, which would include expectations of the Mexicans, as well as the International Organization for Migration (IOM).

The IOM would reportedly pay for their travel through Belize, since the migrants are said to be largely cash-strapped.

Barrow told the press that if Cabinet agrees to facilitate the Cubans, they would arrive via the Philip Goldson International Airport and would be bussed to the Belize-Mexico border for passage via Mexico.

In arriving at its decision, Belize would also have to consider the position of Cuba, with which it has had longstanding relations, as well as bilateral cooperation in areas such as education and health.

“I would raise the matter in Cabinet on Tuesday after we got [Costa Rica’s] paper and after we would have done some preliminary checking with the Mexicans, with the Cubans. We need to know how the Cubans would feel about all this,” Barrow told the press Friday.

“If there is nothing to take to Cabinet, that’s going to be the end of it, because that’s the last Cabinet meeting for the year,” he added.

When Amandala called the Cuban Embassy in Belize on Monday, we were directed to the recently published Declaración del Gobierno Revolucionario, dated December 1, 2015, which states that Cuba’s position was clearly expressed at a meeting of 8 countries of the Central American Integration System (Spanish acronym, SICA) held on November 24, 2015, in El Salvador, to which Mexico, Ecuador, Colombia and Cuba were invited.

According to Cuba’s declaration, the SICA countries called for the adoption of strong and immediate measures to prevent illegal migration flows through their territories and they also spoke out against the US’s “wet-foot, dry-foot” policy for Cubans, as well as other programs which are said to promote “illegal, unsafe and disorderly emigration from Cuba for political purposes,” and which, they allege, are discriminatory against other Latin American and Caribbean migrants who are permanently deported, and who suffer abuse, separation of families and the violation of their human rights.

The Cuban declaration also disputes the premise fueling the mass exodus that the special privilege offered to Cubans would be withdrawn since the United States and Cuba have recently normalized relations.

In a statement given on Thursday, December 3, 2015, Costa Rica’s Foreign Minister, Manuel A. González, said that because Guatemala, like Nicaragua, had decided not to accept the migrants, they had begun negotiations with Belize, which, he said, could not give a reply until Tuesday, December 9.

González said that Costa Rica could not assist the Cubans alone, but it needs collaboration from other countries, principally Mexico and Belize.

He also indicated that the Cuban migrants would have to assume their own travel costs, as those could not be borne by the Costa Rican government.

A news report carried by AFP, an international news agency in Paris, noted that, “Many [Cubans] are flying each week to Ecuador, which does not require visas from Cubans, then make their way through Colombia, Panama and Costa Rica with the goal of moving through Nicaragua and the rest of Central America into Mexico then over the US border.”

The report added that, “They often use bribes and smugglers on the journey, but a recent crackdown on a human-trafficking ring in Costa Rica left hundreds stranded and penniless.”

When we contacted the Embassy of Mexico in Belize today, we were told that they are awaiting a reply from Cabinet in Belize and they had no comment.

While it has been reported that there are 3,000 Cuban migrants stranded in Costa Rica, another 1,000 are reportedly in Panama, also awaiting passage to the US, which amounts to a total of 4,000. That number has grown from a reported 2,000 last month.

Meanwhile, Costa Rica has been advocating for a “humanitarian corridor” to allow the overland passage of the Cuban migrants through Central America and Mexico, as they journey on to the USA.