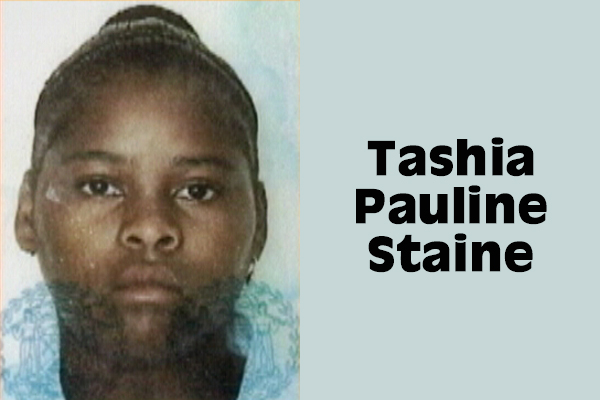 A mother is outraged that a young man whose life she said she had once saved tried to shoot her daughter to death on New Year’s Eve night. More appalling, though, is the fact that the gunman and the victim are cousins, who grew up together but who apparently had issues because of the girl’s association with his rivals, said the mother.

Tashia Pauline Staine, 19, was entering her yard when her younger cousin, known as “Bigga,” 17, allegedly rode up and opened fire on her. When she fell to the ground, the gunman allegedly stood over her and fired more shots before riding away on his bicycle.

The incident occurred a little before 11 New Year’s Eve night, on Gladden Street, just off La Croix Boulevard in the Lake Independence area of Belize City.

Today, Staine—who had been shot 7 times—is recovering at the Karl Heusner Memorial Hospital (KHMH), while charges have yet to be levied against the young man whom she named—while on the ground gasping for air—as the shooter.

Staine’s mother, Germaine Thompson, told Amandala that she was at home Tuesday night when she heard what sounded like firecrackers, but the explosive noises were too loud and too close to her house. So she looked outside to see what was happening and that was when she saw a young man shooting someone who was lying on the ground.

According to Thompson, after the shooter fled, she went to check on the injured person and saw, to her shock, that the victim was her daughter, Tashia.

Tashia was rushed to the KHMH, where she was stabilized. Thompson said that her daughter did not lose consciousness but remained alert.

Staine was upbeat, talking and eating today, although still hospitalized and complaining of body pain.

Her mother told Amandala that she had sent her daughter on an errand when the shooting incident, which is being attributed to gang rivalry, occurred.

We have been told that a group of neighbors and childhood friends have been “beefing” and have broken up into rival groups. One of the groups was friendly with Tashia, and the other group had warned her not to be friendly with them. Thompson believes that this is why her daughter was targeted and shot.

She said that Tashia’s shooting followed an incident in which one of the group leaders was beaten up by the rival group.

Thompson said that the shooter socialized with her daughter, frequented her house and often spent his leisure time on her verandah.

Germaine Thompson is calling on the police to step up their presence in the area and to quell the rivalry among the youth, who used to be friends.

Thompson has made it clear that she is not intimidated by them nor will she be scared into submission and relocate to another area, because she had been living in that neighborhood even before they were born.

The man who is recruiting and encouraging them to commit crimes in the area is 35 years old, and is not setting a good example for the youth, many of whom don’t go to school, she said.