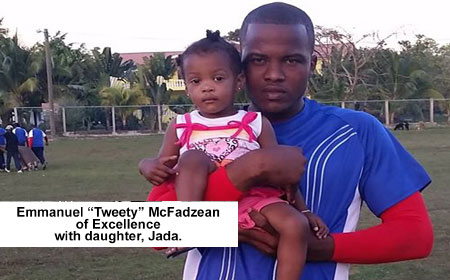 BELIZE CITY, Wed. Mar. 4, 2015–The Harrison Parks National Cricket Competition 2015, under the auspices of the Belize National Cricket Association, continued over the weekend with some very thrilling games, and with a player scoring the first century of the competition.

In Double Head Cabbage, Excellence defeated Excelsior, 366 to 166, with one spare wicket. For Excellence, Emmanuel “Tweety” McFadzean top scored with 122 runs, while Justin Rivers took 5 wickets including that of Tweety. For Excelsior, who made a run for it, Brian Casasola scored 53; and Marlon “Camala” Nicholas took 4 wickets for Excellence. 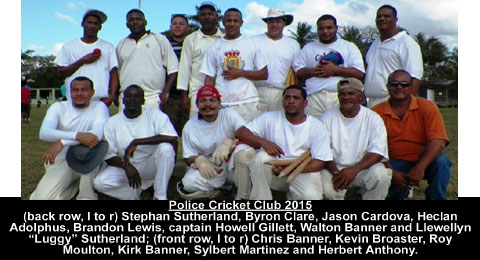 At Sandhill, Police won the game over Bright Star when Bright Star team walked off the field of play. Bright Star scored 102, with Lyndon Ferguson scoring 53. Police went to bat, and at the fall of 6 wickets they had scored 98 runs, and, due to a misunderstanding that happened earlier in the game, Bright Star players walked off the field in a protest. However, just before finishing this article, the captain told me via phone that the team had conceded defeat. Walton “Baby Hulk” Banner took 6 wickets for Police, while Chris Banner scored 24 runs not out. Marlon Rhaburn took 3 wkts for Bright Star.

I have placed back Police team picture, because last week I did not mention one of their players who is the wicketkeeper and is doing a very good job. That’s Kirk Banner, third from right in front row. Kirk is a veteran player. He had played with Surprise, Easy Does It, and other teams in the past.

The following games are scheduled for this weekend, March 7:

Zone One – Excellence vs Easy Does It in Double Head; Western Eagles vs Police in Rancho; Excelsior vs Bright Star in St. Paul’s.

Zone Two – Brilliant vs Brave Union at Crooked Tree; Sunrise vs Berlan in Lords Bank; Wicked 11 vs Cahsu Medicos at Flowers Bank; and Isabella Uprising vs Suga Boys in Carmelita.
Good luck to all teams! I must emphasize to players, please respect umpires’ decisions. Be careful in your words directed to them. Remember, they have family members that may not take your conduct and behavior towards them lightly. Just a warning.