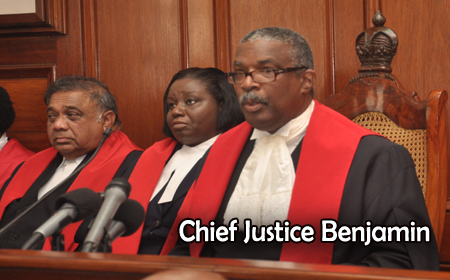 BELIZE CITY–The 2015 legal year began today with the traditional ceremony of pomp and circumstance. Members of the bar, the bench and the various auxiliary support staff of the Judiciary attended a church ceremony at Wesley Methodist Church on Albert Street, from where, led by a police marching band, they marched onto Regent Street to the main Supreme Court building, where Chief Justice Kenneth Benjamin inspected a Belize Defence Force guard of honor, before proceeding to his chambers to deliver his address, declaring the legal year open.

Benjamin said that last year, 2014, was devoted to studying the various areas of reform needed in the Judiciary, but for this year, the focus will be on reforming the judicial system.

Last year’s budget for the Judiciary was a little under 9 million dollars and that was a modest increase of $166.449 in allocation for the fiscal year, Benjamin noted.

“The work of the Judiciary must continue, although the allocation of fiscal funding may be an unheeded cry,” Benjamin remarked.

The Chief Justice said, however, that the Supreme Court has been able to set up strategic partnerships for advance reforms of the justice system.

At the General Registry of the Supreme Court, Benjamin noted that the Registry Information Technology is fully functional. “Although the customizing functions continue… case management is not fully digitized with the issuing of court date and calendars. It is hoped that electronic filings can be a reality in 2015,” he said.

“In the civil jurisdiction 778 new cases were filed, while 786 cases were disposed of,” Benjamin detailed.

He went on to comment that in the criminal division, “The disposal rate of cases continues to be unsatisfactory largely due to the length of trials…”

In 2013, the conviction rate was pegged at 39 percent. This figure, Benjamin said, was “sullied with only an 8 percent conviction rate for murders,” Benjamin remarked that while the figures for 2014 are not yet available, “the systemic problems remain and are the subject of reform.”

Benjamin said that the remand population at the Central Prison “remains at an unacceptable high, notwithstanding a drastic improvement in 2014, from 510 persons to 310 persons. There has been a 40 percent drop in the number of persons awaiting trial at the Magistrate’s Court.”

Benjamin also noted that the number of persons awaiting trial at the Supreme Court has only been reduced by 8. 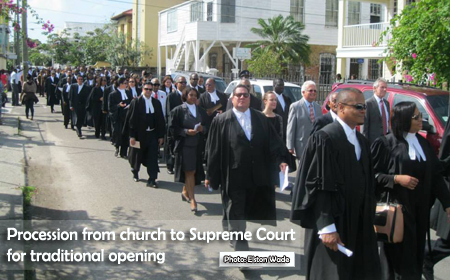 The Chief Justice said that the addition of an extra judge who could hear criminal cases without a jury would help improve this figure.

When it comes to persons awaiting trial at the Supreme Court, 9 percent, or 17 of them have been on remand for more than 5 years.

“In March 2014, a Criminal Justice Board was established. It is chaired by myself as Chief Justice, and is comprised of judges of the Criminal Division, the Chief Magistrate, Director of the Family Court and key criminal justice stakeholders,” said Benjamin.

He further disclosed, “The board set an agenda to address the main priorities and to identify the measures that we will be implementing.”

“The most significant step has been the drafting of Criminal Procedure Rules. These rules described time limits for the disposition of criminal cases, incorporating the principles of active case management. Under the rules, no person should await trial in the Supreme Court for more than two years. With shorter time limits with persons at the Magistrate’s Court, adjournments are to be limited and the early identification of trial issues will be sought through the completion of a pretrial case management form. As the ultimate sanction, judges and magistrates will be empowered and expected to dismiss cases not ready for trial in the time limit,” Benjamin elaborated.

Benjamin said that these rules are in the final stage of preparation and are expected to come into force by early February 2015.

“To address allegations of police brutality and ultimately to boost the number of statements made under caution being admitted into evidence, the Commissioner of Police is expected to introduce police guidelines. Caution statements are to be digitally recorded. The guidelines will also prescribe minimum standards of care for persons in police custody and require police officers to make a complete record of ill treatment of persons in custody. These guidelines will replace the Judges Rules and will be issued by the Commissioner of Police. This will serve to put matters back into the hands of the police where they rightfully belong,” Benjamin said.

The recording equipment for police stations is being sourced through the Central American Regional Security Initiative of the United States Embassy, the Chief Justice said.

Benjamin added that a draft protection of witness bill awaits cabinet approval. This legislation will address the plight of vulnerable witnesses and will provide protective measures for such witnesses and for children giving evidence.

Witnesses will be rendered anonymous in rare cases, and there will also be a provision by means of which some witnesses can provide testimony from an undisclosed location via video, Benjamin said. The video and other equipment needed for this will be donated by the CARSI initiative of the United States State Department, said Benjamin.

There is also a plan in the pipeline to restrict the transporting of prisoners from the prison to court. Video equipment will be installed in designated courts in Belize City to deal with this for adjournment and bail hearings. This will also be funded by CARSI funds.

The Supreme Court has also partnered with UNICEF to make “child friendly spaces” in the districts of Belize in the coming years.

The Magistrate’s Court in Belize City also figures in the plan to improve the criminal justice system. The CJ said that he will continue to dialogue with the Hon. Attorney General.
There were plans for a Drug Court, but it appears to have lost its momentum last year and now the time table will be recalibrated, Benjamin informed.