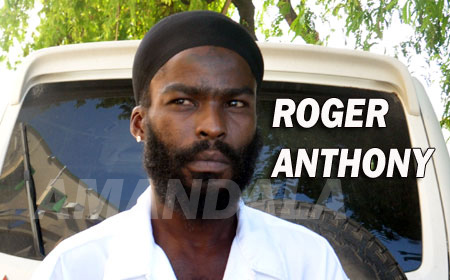 According to a police press release dated today, Monday, October 27, on Sunday, October 26, Shelly Meighan, 39, reported that around 10:10 p.m., “whilst inside her house on Banak Street, she noticed a male person standing outside her house and shortly after, she heard what sounded like gunshots and realized her house was shot at, causing damage to a glass louver.”

The police report said that four expended shells were retrieved from the scene. “No one was injured,” the report said.

“Quick police response in the area led to the detention of Roger Anthony, 37, and a .9mm pistol which was seized. Anthony is in police custody pending charges,” said the report.

Anthony is expected to be taken to the Belize City Magistrate’s Court tomorrow, Tuesday, to be arraigned on the charges.

The police press release, however, did not state what charges would be brought against Anthony.

And what has led to this latest flare-up between the Meighans and Anthony?

Amandala tried to get answers tonight from Shelly Meighan, the mother of Tyrone, Shaquile and Ellis Meighan, Junior, who are said to be members of the Ghost Town Crips.

According to Meighan, her sons don’t “hang out” on Mayflower Street: “Ellis stays at home,” she said.

“Last night, I heard like someone was walking in the yard, and when I peeped out, I saw Roger in my yard,” said Meighan.

“I cannot give the media an interview, because really, I don’t know what cause Roger to want to kill my sons,” Meighan said tonight, as she eyed the two policemen on bicycles approaching from the direction of the nearby gas station.

“This is the second time Roger shot at our house,” she went on to note.

“This is one time I have to thank the police. They were not too far away when they heard the shots and they caught Roger trying to run away. He might have twisted or broken his ankle,” Meighan said.

Anthony, for almost two decades, has been linked to the leadership of the Ghost Town Crips, one of the most feared gangs in southside Belize City.

Before Anthony made his dramatic announcement, Inspector Flowers declared: “We’ve been able to, at this point in time, have some of the leading figures agreeing to not only desist from these criminal activities but to denounce these activities. And I am certainly pleased that Roger Anthony, who is here and who will speak for himself, [will offer] his encouragement to other young folks to also desist and to denounce these sorts of activities.”

“I just hope that the other gang leaders picked up that what I am doing and continue, and we go live in a peaceful country without violence.”

Anthony was asked, “But how do you walk away from all of this knowing that your neighborhood has been accused of many terrible things?”

But if today’s police report is accurate, then last night, Sunday, Anthony may have forgotten those unprecedented statements he made at the police press conference on Tuesday, October 14.