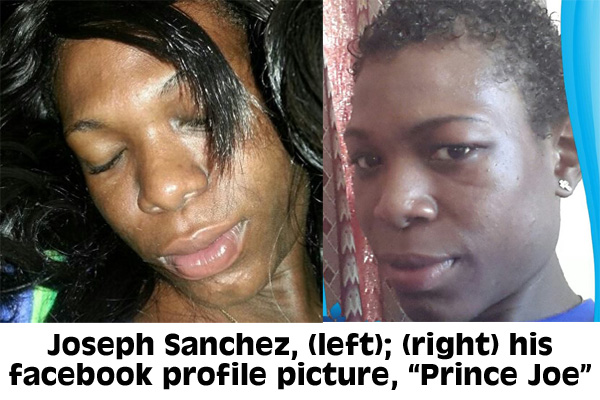 Police say robbery, but family says it was because he dressed in women’s clothes

Police say that at about 1:50 Sunday morning, CIB personnel went to Elston Kerr Street and on the sidewalk saw the body of a dark-skinned man – dressed in a white sleeveless blouse and a short green and black skirt – with a stab wound in the center of his chest.

The body was later identified as that of Joseph “Prince Joe” Jetnel Sanchez, 18, a customer care representative who lived on Laura Dunn Street in Belize City.

Police say that their initial investigations revealed that Sanchez was walking alone on Elston Kerr Street towards the First Stop Taxi Stand near Carter’s Upholstery, going towards Cemetery Road, when opposite the Baptist Church he was approached by two men who tried to rob him. The robbers stabbed Sanchez with a butcher knife before fleeing, police said.

Sanchez’s body was transported to the Karl Heusner Memorial Hospital and pronounced dead at 2:47 that morning.

Sanchez’s family is disputing the police’s theory that his death is as the result of a robbery, however. They say that that theory does not hold water because his cell phone and money were not stolen. They believe that the well-known cross-dresser was killed simply because he liked to dress as a woman.

Virginia Thomasa Arzu, in an interview with Amandala today, said that she and her son had gone out earlier on Saturday night and returned at about midnight. Shortly after, Sanchez got a phone call. He then told his mother that he was going out, and left the house at about 1:00 Sunday morning.

A few hours later, at about 4:00 Sunday morning, police came to her house requesting a photo of her son. When she inquired about the reason why, she was told that he had been killed. She said that he had been receiving death threats, and had been told on several occasions that he would be killed.

Arzu said that Sanchez liked to dress as a woman. A man would usually come to the house for him, but she had never seen the man’s face, because he would normally stay at a distance. She believed it was that man who had called her son out of his house at 1:00 in the morning, and that Sanchez was ambushed and killed while going to meet the unknown person at an unknown location.

Virginia Arzu said that her son was not violent, and did not engage in gang violence or other troublesome activities. He was friendly toward both males and females, she said.

Abner Sanchez, Joe’s brother, said that his brother was frequently harassed and threatened because he dressed in women’s clothing. He said that he, Abner, would beat Joe to force him to stop wearing women’s clothes, but Joe continued the practice and so, he began to leave him alone, because that apparently was what Joe wanted.

Abner said that on many occasions he was there to protect his brother from those who wanted to beat him. A man who thought that he was a girl began to come to the house for him, but would stay at a distance, said Abner. When the man found out that the “girl” was really a man, he began to threaten him.

On many occasions, Abner revealed, men would come pick his brother up in vehicles, and Joe would go out dressed as a woman. They would later bring him back, but he would never walk anywhere with them.

Abner said that when he saw his brother at the morgue, he saw marks on his hands and face which made him believe that Joe fought with his attackers. He believed his brother was lured out of their house, and that whoever did so intended to kill him. He believed that it was a setup by the man who had believed him to be a girl. He said that his brother’s phone had been handed over to police.

Abner said that his brother, who called himself Prince Joe on his facebook page, was a reveler in the Carnival Road March for years.

Joseph Sanchez is survived by his mother, Victoria Thomasa Arzu, and five brothers, including Abner Sanchez. Arrangements have not yet been made for his funeral.

At the time of his death, Joseph Jetnel Sanchez was employed at Ready Call Phone Center.