Cuban accused of gold heist whisked away to the US 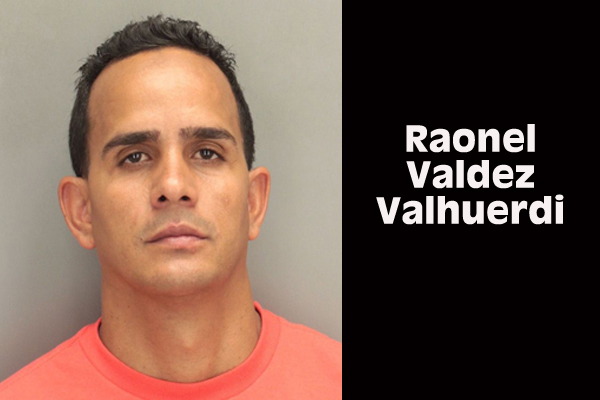 Yesterday, local Immigration and police officials repatriated a Cuban national who, according to authorities in the United States, was wanted in connection with the largest gold heist in Florida history.

After over two months of negotiations between the US and Belize authorities, Raonel Valdez Valhuerdi, 34, was boarded on an 11:30 a.m. American Airlines flight and flown to Miami, where he was booked into the Miami Dade County Jail for his alleged perpetration of the October 2012 robbery of 110 pounds in gold flakes valued at 2.8 million US dollars.

Valdez Valhuerdi was detained after he had been caught by Immigration authorities in the bushes west of Benque Viejo Town trying to slip illegally into Belize from Guatemala on February 18 of this year.

He was subsequently detained, since he had a Cuban passport but could not produce a stamp showing he had entered Belize legally.

On Friday, February 14, Valdez Valhuerdi was charged for illegal entry and fined $2,000, which he paid, but he was not set free since he could not be deported or returned to Guatemala because he didn’t have any visa for that country either.

The Cuban national was therefore sentenced to six months in jail, and that’s when Immigration authorities decided to check his background.

To their astonishment, they found that Valdez Valhuerdi was a fugitive, the accused mastermind of a heist in which nearly 3 million dollars in gold was stolen at gunpoint in Coral Gables, Florida.

US police accused him of concocting the plan – with the assistance of two other men – to steal two rolling suitcases filled with more than 100 pounds of gold flakes from a courier working for a Bolivian export company.

At the time of the robbery, the gold was reportedly being transported to an Opa-Locka refinery.

According to US news reports, he was arraigned and granted bail of $75,000, but eluded US authorities and vanished in March of 2013 after cutting off his ankle monitor while out on bond.

Since then, Valdez Valhuerdi has been on the run for a year and a half and was the subject of an intense manhunt, and according to a wanted poster from the US Marshalls, there was a 25 thousand dollar reward for information leading to his arrest.

Since being nabbed by an alert Belizean immigration officer who checked his name on the internet and discovered that he was wanted in Florida, Valdez was deported and arrived at the Turner Guildford Knight Correction Center in Miami at 3:30 yesterday afternoon because Belize didn’t want him and allegedly, neither did his home country, Cuba.