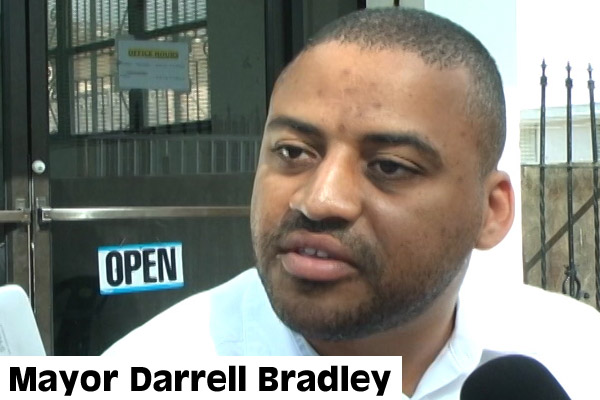 Just before press time tonight, we were informed that the termination of 26 security officers from the Belize City Council has been pushed back once again, this time, until next Wednesday, February 12.

The indication is that the Labor Commissioner needs time to invoke what is called “statutory duty.”

Although we are not sure exactly what that means, it seems that it did not sit well with Belize City Mayor, Darrell Bradley, who, we were told, walked out of the meeting before the Commissioner could conclude what was referred to as a marathon session, which started at around 8:00 this morning.

Almost 11 hours after, representatives of the Christian Workers Union (CWU) and the Belize City Council (CITCO) were deadlocked in a session with the Labor Commissioner, Ivan Williams, to decide the fate of the security officers whose jobs were to be made redundant by City Hall tomorrow.

Both sides made representations to the Commissioner, who then broke into caucus with both sides in separate meetings.

A decision was to be made thereafter, however none was arrived at since neither of the sides could agree on a resolution.

This morning, about an hour and a half into the meeting, Mayor Darrel Bradley left and spoke with the media. He noted that the purpose of the meeting was to reach an amicable resolution to the perceived differences.

He maintained that the Council is determined to treat the staff fairly in this process and that they are determined to deal with the Union and the Labor Commissioner as much as is necessary for them to be satisfied that the prescribed protocols are being followed.

However, he stated that the Council is intent on proceeding with the firings. Bradley said, “For our intents and purposes, we have agreed as a Council to proceed with this [the terminations], and we will proceed with it.”

Bradley insisted that the decision is a move to run the Council more efficiently. While CITCO is currently spending approximately $730,000 for security, the Mayor said that the outsourcing will reduce that amount by over $300,000.

He also disputed the Union’s allegation that the Council has not consulted them on the matter, and noted that they have shown financial documentation to the Union. Mayor Bradley claimed that what CWU President, Audrey Matura-Shepherd, is asking for is not reasonable.

Bradley stated, “We are listening to the union; we are ready to work with them, but you have to come up with reasonable proposals. When you come up with reasonable proposals, then whatever you want us to do – if it is possible – we will do it. Don’t tell me that you want to spend a month in City Council to look at our budget, to make proposals to us to minimize our staff – to me that’s a waste of time. I was in the meeting and I asked one question — what proposals do you have to minimize the adverse effect of the redundancy? The only thing that they told me is that they want a month to come into the City Council, to look at our records, to point out how we can save money. To me, that makes no sense.

“I think Ms. Matura-Shepherd misunderstands her role and function. Her role is not to tell the City Council or an employer whether or not they could make a staff redundant. She wants to go into the City Council’s books to make suggestions as to how the council could be more efficient in its operations. I was the first to respond to her to tell her that I know the Belize City Council is one of the most inefficient organizations, so I don’t need Audrey Matura to tell us that we are inefficient. What we want to hear from them is very meaningful proposals of how we can reduce the harmful impact of this redundancy on workers. We don’t want to hear whether or not we are spending adequately on security. She asked a question about security vehicles; she wants to know who drives that vehicle, where is that vehicle parked – that is not your business. Your business is to deal with the workers.”

While the union maintains that the employees to be fired by the council should have been given a month’s notice by law, Bradley said that is not so, and that in fact, the council is on point with what is required by law. He also alluded that if the CWU wishes, they can resort to judicial review.

This is what CWU president told us in relation to the notice time even as the meeting continued at the Labor office. “At this point, I’d say we are at a deadlock. The Commissioner has refused to give his position at this point in time. Our deadlock is at the point where we are saying for those workers who have to go find another job, let me pay you your severance, and if they are not getting any pension we are asking for a compassionate package, and if they agree to this package then we would not demand the extension of time because we would have been able to get the additional benefits we want for the employees”, explained Matura-Shepherd.