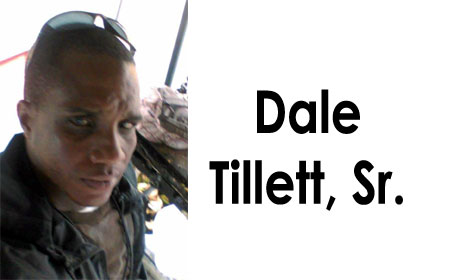 BELIZE CITY, Mon. Dec. 5, 2016–The last thing Dale Tillett, Sr., did on Friday night was to read one of his poems, “Cutting a black man’s life in half,” which condemned violence, at the Bricks Bar and Grill on King Street in Belize City.

However, almost as soon as he stepped out into the mean streets of Belize City, his life was cut short by the same violence he decried in his poetry.

Tillett, 44, is no stranger to Belize City’s violence, as almost 5 years ago, he buried his son, Dale Tillett, Jr., 19, after he was shot in the head inside the then popular Palm Island night club in Belize City.

According to police reports, at around 3:45 on Saturday morning, they responded to a shooting incident on Hydes Lane in Belize City, where they saw Tillett, Sr., also known as “Blinds,” with apparent gunshot wounds in the right side of his neck.

He was pronounced dead on the scene.

Police investigations revealed that Tillett had left a north side club and was headed home through Hydes Lane to North Front Street on foot with three other men when two men on a motorcycle approached from behind, firing indiscriminately.

The men tried to flee from their attackers, but “Blinds” collapsed yards away in front of Dario’s Meat Pie shop.

His friend, David Garcia, 28, escaped with gunshot wounds in his left shoulder and has been listed in a stable condition at the Karl Heusner Memorial Hospital.

The other unidentified man who also came under fire escaped unharmed. Information to Amandala is that he was the intended target.

Police have since detained four men from a major north side Crips gang in connection with this latest shooting.

According to police information, the slain Tillett is not connected to any criminal gang and is not known to the police.

Today, Monday, our newspaper spoke with the mother of the victim, Geraldine Tillett. She told us that Tillett was not only her eldest child, but a tour guide of many years, a poet and a father of eight.

She told us that he had received many positive reviews on Tripadvisor.com for his tours and one day dreamt of having his own company.

Additionally, he dreamt of publishing his poems and had met last week Thursday with his colleagues to discuss the launch of his CD of poems, which was to be done with an anti-violence initiative.

Tillett’s colleagues inside the Spokenword 501 poetry group are planning to launch his work and donate the proceeds from sales to his children.

According to Tillett’s mother who begged for peace, “sometimes life throws curved balls at us and we must deal with them.”