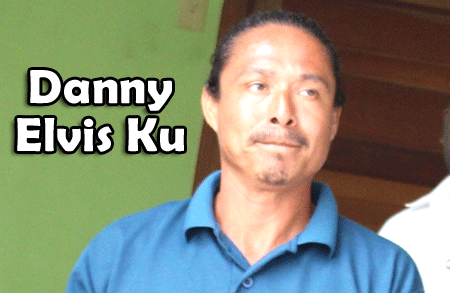 BELIZE CITY, Mon. Feb. 13, 2017–Danny Elvis Ku, 37, who was accused of viciously stabbing his wife to death in December of 2006, was scheduled to go on trial today in the Supreme Court of Chief Justice Kenneth Benjamin. Instead of the court empanelling a jury of 12 to hear the evidence in the Crown’s case against Ku, however, the Crown Counsel representing the prosecution informed the court that they were withdrawing the murder charge and that the accused man was changing his “not guilty of murder” plea to “guilty of manslaughter,” the lesser charge.

He was found guilty in 2010 of the 2006 murder of his wife, but won an appeal and a new trial was ordered

After the court accepted the guilty of manslaughter plea, attorney Bryan Neal, who represented Ku, asked the court to defer sentencing of his client for one week so that he could locate character witnesses for a mitigation hearing.

Ku was accused of killing his wife, Anna Maria Magdalena Vasco, 27, during a domestic dispute at their Orange Walk Town home, on December 16, 2006. Anna Marie Magdalena Vasco, a nurse, had her throat slashed with a blade, and then she was stabbed multiple times in her chest. She suffered as many as 32 stab wounds.

This morning, Crown Counsel Shanielle Chell and Javier Chan, who are prosecuting the case, presented the Crown’s evidence against Ku.

On the morning of December 16, 2006, Ku and his wife had a domestic dispute that led to the stabbing. After murdering his wife, Ku left the premises, caught a taxi and headed to the Belize/Chetumal border. On his way to the border, Ku stopped the taxi in Corozal Town and called the Orange Walk Town Police to tell them that he had just killed his wife.

During the phone call to the Orange Walk Town Police, Ku left a number with an officer who had answered the phone.

Later that same morning, Robert Mariano, a police officer, returned Ku’s phone call. Apart from telling Mariano that he had killed his wife, Ku also told him where the body could be found.

Later that same morning, Ku turned himself in to Orange Walk Town Police and gave them a caution statement.

In the statement, Ku told police, “Yesterday at 7:00 a.m., while at home, we were having an argument. I left home and when I came back home, we argued again. Then we became intimate. We were having sex, and then she told me stuff….”

“She told me she wanted to kill herself, so I began to choke her so she come back to herself. She told me she will kill herself, and then she will kill me too.”
Ku also said that it was at this point that his wife got a knife from off a table. He said that she went into the living room and then he heard some noise and she was kicking a sofa. She had a screwdriver in her left hand. She was bloody.

Ku told police that he tried to choke her again so she could die easier, but that did not work, so he used a knife to stab her.

He then went into the bedroom and found her purse that had in three razor blades, and he took out one of them and tried to cut his own wrist, but he never had the courage to do so.

Ku said he had become confused and tried to change his wife’s clothing because she had urinated herself; he undressed her because, he said, he could not take the bloody scent anymore.

He went to an ATM to get cash to go to Chetumal. On his way he turned back to call the police, and that was when he threw the knife in a drum, which was near the steps of their house.

Police later retrieved the knife in a dumpster on the Otro Benque Road, outside of their house.

On that same day, at about 2:30 p.m., Doctor Mario Estrada Bran concluded a post-mortem and said that he saw three sharp slash wounds to the front lateral areas of her neck.

The slash wound was located at the left side of her neck, up to the jaw area. He also observed a stab wound in the center area of the neck. He observed 32 stab wounds in her chest area.

Doctor Estradabran concluded that Nurse Vasco died from traumatic asphyxia as a consequence of total trachea injury due to a sharp instrument.

Doctor Estrada Bran also observed Ku on the day of the murder and observed that he had bite marks and multiple fingernail impressions over different parts of his body.

Police did not include in Ku’s statement that he claimed his wife told him, “I have a man who sex me 10 times better than you.” Ku told police that in his statement, but they did not use it. The defense attorney said he would have used that as part of his defense.

On July 26, 2010, trial commenced for Danny Ku and on September 1, 2010, he was convicted of Nurse Vasco’s murder. He later appealed his conviction and on March 30, 2012, the Court of Appeal heard his case and ordered a retrial.