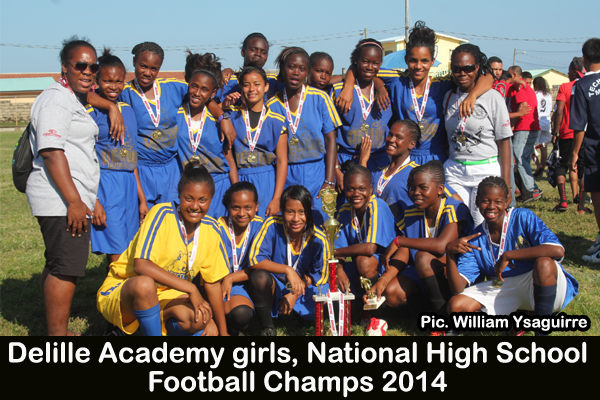 The results of the National Secondary Schools Sports Association’s (NSSSA) national high school football tournament, held on Friday and Saturday, February 14-15, at the Carl Ramos Stadium in Dangriga, appear to strengthen the theory held by some observers that the team that wins in a tough battle in game 1 on Friday usually falls in the finals on Saturday. Both female winners on Friday had convincing victories; but the last male match-up had to go to overtime and then penalties.

Four male and four female teams represented the four country regions – North, Central, West and South in the high school football Nationals, which follow a simple knockout format, with Friday’s losers playing for 3rd place on Saturday, and the winners on Friday meeting for the championship on Saturday.

Participating teams and their respective regions were:

In the female opener on Friday, Orange Walk Tech had an easy time crushing Gwen Liz High from Belize City by a 5-0 score, with 4 goals from Gisel Baeza and 1 from Noriely Terry.

Next was a male encounter, and this time it was Belize City’s Wesley College taking a 4-1 whipping from the North’s Escuela Secundaria, who had goals from Luis Witz (2), Camilo Sanchez and Steve Grant; while Tyrell Rowley scored for Wesley.

Game 3 on Friday saw the females of Dangriga’s Delille Academy cruising to a 3-0 win over St. Ignatius High School from the West, with goals from Shayama Caliz (2) and Naomi Gamboa.

Game 4 on Friday was the final match of the day, and turned out to be a real dog-fight between the boys of Independence High School from the South and Mopan Technical High from the West. It was 0-0 in regulation; 0-0 in overtime; and finally, Independence High emerged victorious, 4-3, over Mopan Tech. Goals for Independence High were by Wilber Rivas, Anthony Linarez, Osmani Sanchez and Charles Leslie; while Mopan Tech scorers were Christian Lopez, Wilber Reyes and Denivar Chan.

In Saturday’s female 3rd place game, St. Ignatius High won in overtime, 2-1, over Gwen Liz High, after being 1-1 in regulation. Jinelle Smith got both goals for St. Ignatius High, while Vivica Young scored for Gwen Liz.

The male 3rd place match also ended 2-1, but this one finished in regulation, with Mopan Tech clipping Wesley College, with both goals coming from Wilber Reyes, while Keeron Young got the sole tally for Wesley.

Next was the female championship match, and this one went down to the wire, with Delille Academy prevailing 3-2 in penalty shootout, after ending regulation and overtime deadlocked at 1-1, for a final 4-3 score. Shaking the net for Delille were Shayama Caliz (2), Naomi Gamboa and Orel Gillett; while Orange Walk Tech goals were by Gisel Baeza and Noriely Terry.

The much anticipated male championship match turned out to be a one-sided affair, as Independence High boys fell, 4-1, to Escuela Secundaria Tecnica, who had goals from Jamin Posadas (2) and Camilo Sanchez; while Gregory Almendarez got the only goal for Independence High.