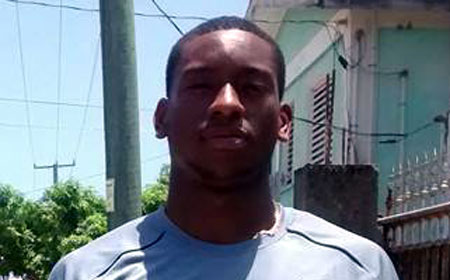 BELIZE CITY, Wed. May 6, 2015–Belizean basketballer, Devin Daly, 20, who attends Lake Superior State University (LSSU) in Michigan, USA, is presently in the country to conduct practical biology work as part of his course in Conservation Biology at the notable public university.

The graduate of St. John’s College departed Belize 3 years ago on a full basketball scholarship at LSSU, where he majors in Conservation Biology and minors in Fish Stock Management, while playing point guard on the school’s basketball team, which is known as the LSSU Lakers.

That team has notably won 2 state championships with the assistance of Daly, who has stepped up his game to the point of earning the title of the team’s 6th man.

The promising young “baller,” who is now in his 3rd year at the university, spoke with KREM News today after he delivered a motivational talk to students at the Belize High School, and he expounded on how it feels to be back home and ensuring that he continues to give back to his community, while he does school work.

He said, “I’m glad to be here to visit my family and friends, and share a positive message to the youths to help them to progress in their academics.”

“Later this year, there will be a class coming to Belize from LSSU as part of our marine studies. I’m doing mine now because when that time comes, I will have basketball season. We are studying mangrove protection, fish species, and the coral reef systems in the cayes, near the coral reefs, and also in the wetlands and lagoon systems in Belize.”

Daly explained that the decision to conduct the studies in Belize is chiefly because he had told his LSSU advisor about Belize’s abundant natural marine resources shortly after his enrollment at the school, which has around 3,000 students.

That advisor, he said, decided to visit the country last year and was “inspired” by what she saw, and as a result, the advisor is now bringing an entire class of LSU biology majors to Belize later this year to do practical biology work as well.

“I’m all about progress, and I’m just happy to put Belize on the map in a positive light,” he remarked, adding that he intends to make full use of all the resources at his disposal as he aspires to either play professional basketball if possible, or continue school to procure a Master’s Degree.

Daly is on a 10-day trip and has been in the country for the past two days.

He is a native of southside Belize City who moved to Mahogany Heights at Mile 31 on the George Price Highway in the Belize District with his parents before he went to the US in May of 2012.

When asked about his sentiments towards the ongoing street violence which continues to subdue his neighborhood back at home, he replied that he is both concerned and disheartened about the situation, but mentioned that he believes that if he could “shed a positive light” about what he is doing, he could hopefully inspire his fellow youths to curb the hostilities.

Daly said that he has one more year of studies at LSSU, and that he currently has his sights set on either a career in the National Basketball Association (NBA) or engaging in conservation work in Belize.