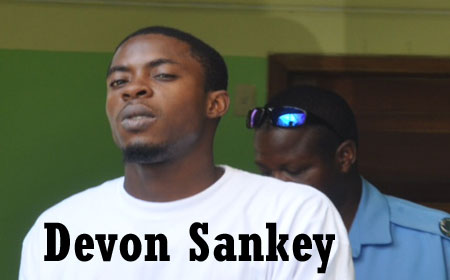 BELIZE CITY, Wed. July 15, 2015–Another accused murderer walked down the steps of the Supreme Court this afternoon, the second man to do so this week, in a trial by judge without jury.

The trial of Devon Sankey, 22, who was indicted for the April 8, 2010 shooting death of Renan Reneau, came to an abrupt end when Sankey’s attorney, Oscar Selgado, made a no-case-to- answer submission that Justice Gonzalez upheld.

The Crown’s case ran into difficulties early in the trial, which began on Monday, July 13, because the key prosecution witness, while admitting visiting the police station, denied making the statement that police attributed to her.

Counsel Kileru Awich, who led the prosecution’s evidence, managed to call four witnesses to the stand to testify before his main witness, Arilee Summerville, the girlfriend of the murdered man, Renan Reneau, took the witness stand and had to be declared a hostile witness.

Reneau had been shot four times in the upper body. The shooting occurred in front of his girlfriend’s home, located at 3166 Kut Avenue.

Summerville made it unequivocally clear that she wanted nothing to do with the trial.

When Awich told her that she had signed the witness statement that she gave to police in 2010, identifying the shooter as Sankey, Summerville told the court that police took her from her home, but she never gave the lead investigator, Corporal 155 Arcadio Chun, any such statement.

Summerville admitted to speaking to the police, who asked her a number of questions, but she was adamant that she had not made the statement on which the prosecution’s case was relying.

The hostile witness admitted to signing a document at the police station, but told the court she only signed because the officer who had spoken to her told her that his superior would know that he had spoken to her, so she had to sign the document.

Summerville admitted that the signature on the statement was hers; she said, however, that the document was never read to her, nor was she allowed to read it. Therefore, she did not know what it said.

The witness admitted, however, that she did tell the police that on the day before her boyfriend was murdered, she and her sister had an argument with Sankey. She said it was just an altercation, but did not provide the specific details of what had caused the argument. In fact, she could not remember what the argument was about, she said.

During this session of the Supreme Court, nine men, including Sankey, have been acquitted of murder.

On Monday, July 13, 2015, Jamie Smith walked from charges for the double murder of Eric Arana and Dwayne Tillett.