Do or die, FC Belize 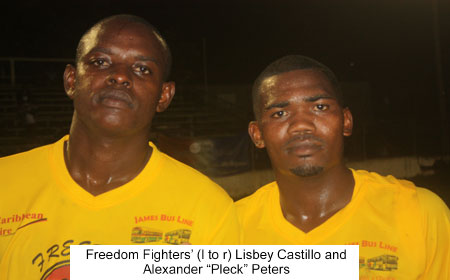 BELIZE CITY, Thurs. Dec. 1, 2016–Whatever the outcome of the dreadfully late FFB Appeals Board meeting tonight, one thing is for certain: FC Belize can determine their playoff fate on Sunday at the MCC, when they clash with visiting Freedom Fighters FC from Punta Gorda, fresh from a 3-3 draw against Belmopan Bandits and a 3-0 victory over Wagiya. Meanwhile, FC Belize is in a sort of tailspin, with a 2-2 draw with Wagiya, followed by back to back losses, 1-0 to Police United and 2-0 to BDF. With their Mexican striker Hector Martinez injured, FC Belize is scoreless in two games; and they just lost their Mexican sweeper Jordi Lopez to red card in their last outing. Lisbey Castillo, Alexander “Pleck” Peters and their Freedom Fighters from P.G. are coming to avenge their 2-0 loss to FC Belize in their first meeting in P.G. Veteran defender Floyd Jones will have to play “big” for FC Belize in the sweeper position, as their other veteran defender Mark “Kelo” Leslie is still injured. The future of FC Belize may rest in the hands of their youths – strikers Russell Cassanova and Marlon Gutierrez, midfielder Harlan Cassanova, and defenders Francis Arana, Matthew Leal and Andrew Estell.

BDF plays out of Belize City, so city fans are assured of seeing some playoff action this season; but FC Belize is the more recognized city team, and their fans will be on edge come
Sunday. They can’t afford to lose to Freedom Fighters; and even a draw might not be enough, should a negative result come from the Appeals Board meeting. A win on Sunday guarantees FC Belize a spot in the PLB playoffs.