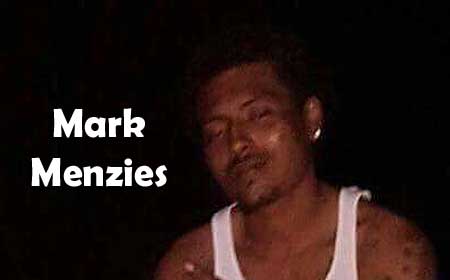 TEAKETTLE, Cayo District, Mon. June 26, 2017–Teakettle residents, dissatisfied with the efforts police have made to find a missing villager, made a giant blaze on the George Price Highway this morning, Saturday, June 24.

Mark Menzies, 23, was reported missing after he left home around 11:30 Wednesday night and did not return.

The villagers piled tires on the highway, and lit them, slowing down traffic on the highway for about an hour. The Belmopan Fire Service and the Belmopan Police were called to the scene, to put out the blaze and clear the debris off the highway. Motorists who were in a haste to get on with their business were able to divert to a dirt road to get around the village and back on to the highway.

Superintendent Howell Gillett, Commander of the Belmopan Police, told us that the villagers committed a criminal act when they burned the tires on the highway. He said that villagers have no need to resort to this type of behavior because he is always willing to dialogue with members of the public who are dissatisfied with the service the police are providing.

Superintendent Gillett said that the police have been conducting land searches and river patrols along with community members in an effort to locate the missing villager. He said that the Coast Guard had also conducted a diving operation in the river yesterday, but the effort was fruitless.

The police do not have divers, he explained, so they depend on the Coast Guard. The Coast Guard operations had to be discontinued because the river level is currently high and they do not allow their divers to work in flooded waters due to strong current, poor visibility, and other dangers that can befall their divers.

As soon as the condition of the river improves they expect the Coast Guard will be combing the river again. Meanwhile, they are continuing to search on the land and near the river.

Facebook
Twitter
Pinterest
WhatsApp
Print
Previous articleVideo surveillance footage is said to have aided police in arrest of Kashief Gallego for murder
Next articleRural Softball completes 1st round; All Star Game this Sunday