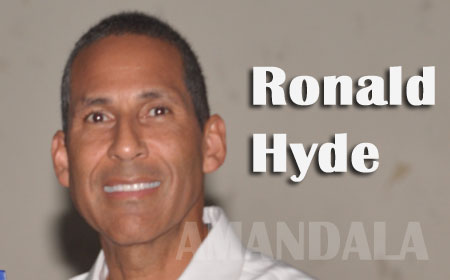 The president of the Kidney Association of Belize, Ruby Nicholas, delivered the welcome address.

Before Dr. Hyde delivered his incisive message, which focused on the early detection and treatment of kidney disease, local healthcare professionals spoke about the rising incidents of kidney disease in Belize. Among those making presentations was Dr. Adrian Coye, the newly appointed Chief Executive Officer of the Karl Heusner Memorial Hospital.

Dr. Coye said that most of the patients in Belize suffering from kidney problems are quite young. He attributes the kidney ailments being suffered by young Belizeans to a rise in hypertension and diabetes. Dr. Coye also mentioned that “we have a problem of self-medication in Belize. And these are practices we have to get out of.”

A representative from La Loma Luz, Sah Tiemula, also made a presentation. Tiemula said that generally kidney failure occurs very slowly, and cautioned the audience, “We must learn the habit of paying attention to our bodies.”

Two other speakers who addressed the attendees prior to Dr. Hyde’s presentation were Norman Romero, a kidney patient, who spoke about his experience with renal failure and the high cost of dialysis treatment, and Dorita Quiroz, who had traveled to Mexico City and spent many months waiting for a kidney transplant operation.

Dr. Ronald Hyde, a Belizean, is the son of Charles Barlett Hyde and his wife Elinor. He is the younger brother of Amandala publisher Evan X Hyde, with whom he worked as editor of Amandala before embarking on his medical studies in the United States.

Dr. Hyde, who is board certified in internal medicine and nephrology and is currently a serving board member of the Renal Physicians Association, travels frequently to his native Belize.

Dr. Hyde began his presentation with an anecdote about a car journey that he and his wife had taken. They were heading to California to watch a college football game between Notre Dame and USC. As their journey progressed, he said that they began to smell something acrid from the car. “We looked at each other, and said, ah, California, known for its smog,” he recalled, then he declared: “It wasn’t the smog in California. It was something with the car.”

Eventually the car shut down, blowing its head gasket, because someone did not put oil in it.

“If someone had checked the oil in the car, it would not have broken down and cost thousands of dollars to fix and drive back to Arizona. Knowledge is power,” Dr. Hyde explained.

“How do the kidneys work? Basically, blood is pumped from our heart to all our essential organs and arteries, muscular tubes that squeeze blood along the way, and then these arteries break down into fine little capillaries and then they sort of combine themselves into these low pressure veins that take the blood back into the heart. But the kidneys are different.

Instead of breaking down into capillaries and back into veins, after this tangle of small blood vessels is made, the kidneys have another artery at the other end of the capillaries. So basically, the kidneys work like hydraulics,” he said.

Dr. Hyde explained that if the blood is not circulating properly due to high blood pressure, such a condition will affect the function of the kidneys.

“So, high blood pressure, diabetes, aging can gradually cause those blood vessels leading in and out of the kidney to get damaged,” said Dr. Hyde. He then went on to note, “People can be unfortunate enough to have different kinds of inflammatory conditions.”

Citing Ebola as an example, Dr. Hyde detailed what Ebola does – that it damages the blood vessels of the body and part of that failure winds up damaging the kidneys and that’s why many people with Ebola suffer kidney failure.

“There are things that could be done to check your kidney functions. Your kidneys are very small, 11 to 12 centimeters or about 6 inches in the average person. But they are responsible for about 20 percent of the blood that the heart pumps,” Dr. Hyde explained.

“It turns out that most of what the kidneys do can’t be measured,” said Dr. Hyde.

“For most people, as we get older we slowly lose our kidney functions. But we start off life with so much kidney function. But, if we play our cards right, we can live on a small amount of kidney function, then we die before it matters,” he remarked.

“They say the sickest kidney is smarter than the smartest doctor; they can do enough to keep you alive,” Dr. Hyde pointed out.

He then advised, “If you find out what your kidney function is now, you can start to make plans to keep what you have. If you only knew that changing the oil in your car, [could] prevent the gasket from blowing.”

Dr. Hyde said that there are a number of things that can go wrong with our kidneys, but a lot of what can go wrong is treatable if we catch it early. Some of these ailments are curable, if medical attention is sought before it’s too late.

Research is showing that the medicine that is used to lower uric acid in people who have gout is now being shown to slow down kidney problems and might have some benefits for the heart.

“When it comes to diabetes, when it comes to high blood pressure, you can make the changes in your life, and that is what the Kidney Association is here to promote: Awareness. Knowledge is power. Take steps now, before you end up spending thousands of dollars and disrupting your life unnecessarily,” said Dr. Hyde.