The drill rig is coming: US Capital 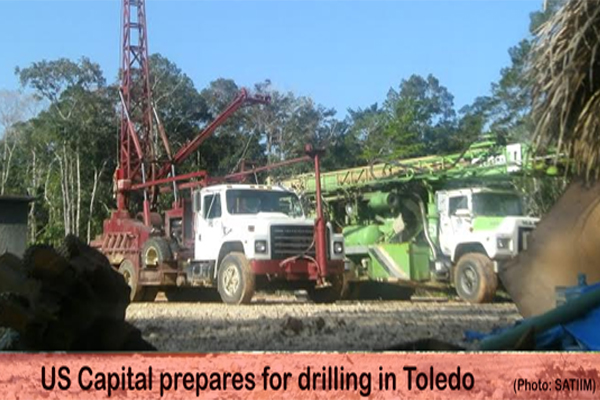 Senior Counsel Eamon Courtenay indicated to Amandala today that the court hearing to review a request made by the Sarstoon Temash Institute of Indigenous Management (SATIIM) and four Maya villages: Conejo, Crique Sarco, Midway, and Graham Creek, for an injunction order to stop US Capital Energy from proceeding with petroleum works inside the Sarstoon Temash National Park will help to resolve the pending issues which lie at the heart of the dispute between the Government of Belize and some Maya communities in Toledo.

The Maya communities in question continue to call on the Government of Belize to consult with them before US Capital begins to drill inside the national park.

Currently, the project is at a virtual standstill, but Alistair King, the representative of US Capital in Belize, told Amandala today that they intend to press ahead as soon as possible, but works, he said, have been delayed because they are still waiting for the rig to arrive from Mexico—and they hope it will by the end of the month.

The parties could not agree on the wording of the final order to propose to the court, so Justice Michelle Arana has issued a perfected order, in line with a ruling she handed down last month, mandating the Government to engage the four claimant communities in consultations, to obtain their free, prior and informed consent.

Senior Counsel Denys Barrow, attorney for the Government of Belize, told Amandala today that the Maya could never have veto powers; he said that both domestic and international law make it clear that the Government must engage in a process of consultation with the Maya.

“No doubt the consultation must [be] meaningful and not window dressing, as the judge puts it. It must be done in good faith and it must be a genuine attempt. So it is the process of consultation that is important,” Barrow told us.

He went on to say that it is the Government’s view that it has done what it needs to do, in consulting the village of Sunday Wood.

“You may know that there is a document called the Maya Atlas. It shows the boundaries claimed by each community,” said Barrow, adding that only the village of Sunday Wood is in the park and “no other village or community.” Barrow furthermore asserted that the original permit specifically excluded the lands of Conejo.

He maintains the view that the Government can waive the expiration on the permit which expired at the end of April, and he said that the judge’s order cannot apply to that permit because a person “cannot seek the free, prior informed consent for something already done.”

SATIIM and the claimant villages continue to hold their ground, despite Government’s stance. They are looking forward to the injunction hearing slated for Monday, June 16, 2014.

Meanwhile, King told us that, “The rig is on its way, and it might be in by end of month.”

He said that the rig will have the capacity to drill to about 10,000 feet, and US Capital has everything ready on the ground to proceed, once that drill arrives.