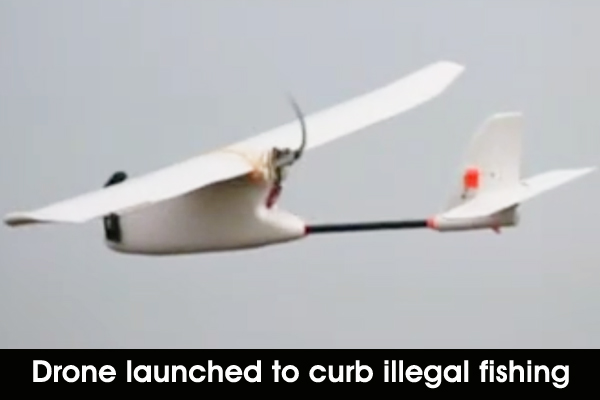 Last September, we reported to you that Belize was considering whether it would introduce drones to police its maritime space for illegal fishing.

In February this year, we told you of the decision by local fisheries authorities to introduce them in 2014; and this week, the Belize Fisheries Department made it official when they proceeded to test-launch two drones provided by Conservation Drones at the conclusion of training for staff of its Conservation Compliance Unit.

This makes Belize the first country in the Caribbean to introduce the technology. Reports to our newspaper indicate that Jamaica is also considering introducing the same technology.

Michael Sabal, chief coxswain at the Belize Fisheries Department, told Amandala today that the drones will significantly cut down on the cost of patrolling Belize’s coastal waters, and it will save them the embarrassment of running out on prank calls, which they do get from time to time.

Calman Hall, assistant coxswain, showed us the computer hardware and software they will be using to track the movement of the drones, as they fly over fishing grounds well known for illegal activities.

The problem is, illegal fishers can hear boat engines from a distance and evade fisheries personnel. The drones, which are more discreet, could help them catch illegal fishers red-handed with footage that will be admissible in court.

According to Sabal, two hot spots are the South Water Caye Marine Reserve and the Glovers Reef Marine Reserve, where out-of-season fishing for conch and lobster, particularly ahead of the open season, has been known to occur. The quiet aerial spies may also assist surveillance personnel in tackling illegal gillnet fishing in grounds close to Gales Point Manatee, and other such locations. He said that while they have confiscated several nets, they never find anyone to arrest.

“The drones will assist the department in many ways, especially right now in minimizing the patrols we need to do. It is cost effective, and it will cut down on fuel costs,” Sabal told us.

On Thursday, the staff of the Fisheries Department concluded their training, and test launched the drones.

Sabal said that while they have found taking off to be quite easy, landing the drones, operated via remote control, has proved challenging. That challenge is made easier by an automatic feature called RTL – return to launch, which helps to steer the drones back to their original location.

According to Sabal, the drones—which measure about 4 feet—will fly over 100 meters in the air, where they will be barely visible, and they will be monitored real-time via computer.

The drones are assembled only when they are about to be deployed, and disassembled after an operation. The assembly process, said Sabal, takes only 15 minutes.

The drones are powered by batteries which can last up to 90 minutes, which is enough for a 10-mile range, said Sabal.

Hall, his assistant, told us that the drones are equipped with cameras to capture live feed, or they can capture and bring back videos for analysis.

During the course of the training, the innovators of Conservation Drones taught the fisheries staff how to set up and maintain the drones, and how to set up operational patrols using the software.

According to the Wildlife Conservation Society (WCS), they funded the purchase of the drones. The WCS provided financing of US$12,000 for the project, which included training costs.

Earlier this year, Jamaica’s Agriculture Minister Roger Clarke announced that they are also looking at introducing drones to help police fishing grounds, because they are losing millions of dollars each year to foreign poachers.