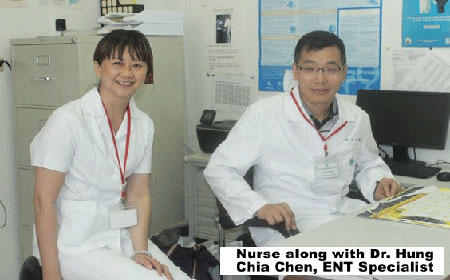 BELIZE CITY, Tues. Oct. 6, 2015–A team of three doctors and three nurses are here in Belize from Far Eastern Memorial Hospital (FEMH) in Taiwan and will be conducting free clinics for four days at the Belize Council for the Visually Impaired (BCVI) and Karl Heusner Memorial Hospital (KHMH). The team includes specialists in ophthalmology, E.N.T. (ear, nose and throat), and nephrology.

The Ambassador of Taiwan to Belize, Benjamin Ho, said that the visit is possible because of an agreement between Taiwan and the Ministry of Health which was signed earlier this year.

Carla Musa, Executive Director of BCVI, a non-profit organization which carries out comprehensive eye services, said that the ophthalmologist will be performing cataract-removal surgeries on at least 20 of the BCVI’s patients.

Meanwhile the ENT (ear, nose and throat) specialist and nephrology doctors were assigned to the KHMH (Karl Heusner Memorial Hospital). A nose surgery is scheduled to be performed by the ENT specialist, Dr. Chia Hung Chen, but the number of patients who will receive care from Chen has not yet been determined.

On the other hand, the visiting nephrologist, Dr. Hung-Yuan Chen, will not be conducting surgeries, but will be giving medical care to diabetic patients who are suffering from kidney problems. Chen said that the major complications that are associated with diabetes are blindness, kidney failure and damage to the nerves such as numbness in the hands and legs. It is estimated that 15% of our adult population suffer from this disease.