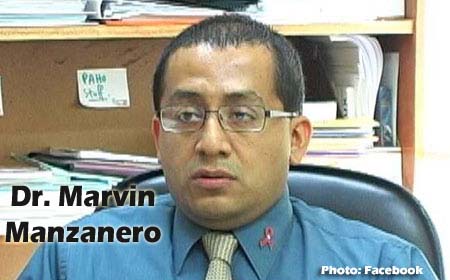 BELIZE CITY, Thurs. Dec. 3, 2015–Dr. Marvin Manzanero, the man who has been known as the epidemiologist in the Ministry of Health and the person in charge of the ministry’s HIV/AIDS desk, has been promoted to serve as the ministry’s new Director of Health Services (DHS).

Manzanero told us that Health Minister Pablo Marin offered him the job after the general elections, after which the last DHS, Dr. Ramon Figueroa, was upgraded to become Marin’s Chief Executive Officer, replacing Dr. Peter Allen, who was moved over to the Office of the Prime Minister/Ministry of Finance, Public Service, Energy and Public Utilities.

After Figueroa became the DHS, Manzanero succeeded him as Director of the Policy, Analysis and Planning Unit – a job he had held since September. He has more recently served as the interim DHS for the past three weeks, while waiting for the paperwork for his formal appointment to be finalized.

Manzanero told us that he did not accept the offer right away, since it is a very serious post that requires a lot. He took a few days to think about it, he said, and later decided to accept.

Dr. Russell Manzanero, the epidemiologist who was with the Belize Defence Force, is now with the ministry on secondment, he informed.