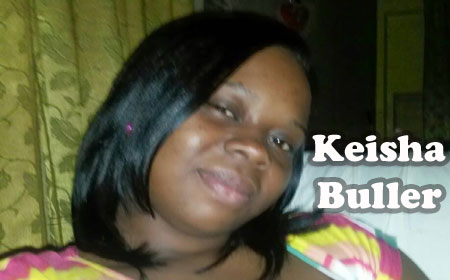 BENQUE VIEJO DEL CARMEN, Cayo District, Mon. July 13, 2015–A Customs officer was stabbed to death in her home in Benque Viejo del Carmen, allegedly by her abusive common-law husband, who is unemployed, and who, today, was charged with murder in the San Ignacio Magistrate’s Court.

Keisha Buller, 25, a Customs officer at the Belize Western Border, was rushed to the Western Regional Hospital suffering from stab wounds to the neck, upper body and abdomen, but was declared dead on arrival.

Police quickly arrested her boyfriend, Ervin Wade, 29, of Benque Viejo, at a roadblock near Galen University in Central Farm as he was trying to escape from Benque Viejo after Buller died. Wade was taken to the Benque Viejo Police Station, where he was charged with murder.

Ervin Wade was taken to the San Ignacio Magistrate’s Court this morning, Monday, and arraigned on the charge of murder, use of deadly means of harm and grievous dangerous harm. No plea was taken from him and he was remanded to the Belize Central Prison until September 17.

The incident occurred at about 3:30 Thursday afternoon at Buller’s house at 28 George Price Street. Police said that the couple became involved in an argument, at the climax of which, Buller’s common-law husband, Ervin Wade, stabbed her about 10 times, after which he fled the house in his white pickup truck, taking the couple’s 4-year-old son with him.

Superintendent Daniel Arzu, Commander of Benque Viejo Police, said that when police arrived at the scene of the crime, they saw a woman lying on the floor with multiple stab wounds, in pools of her blood.

Arzu said that Wade had stabbed her in the presence of Buller’s grandmother and the couple’s 4-year-old child.

Reports to Amandala are that Buller’s grandmother tried to stop the brutal assault on her granddaughter, but to no avail.

Benque police told Amandala that Buller had filed two reports against Wade for beating and abusing her, but she later asked that no action be taken against him, and he was only reprimanded by Benque police and released.

According to 7 News, Buller’s death came as a shock to her friends and co-workers because she had recently passed exams which were a prerequisite for a promotion, and her career was on the rise. Her posting at the Benque Viejo border was coming to an end and she was to go on vacation next week.

The couple had been separated, but Buller had recently decided to resume the relationship.