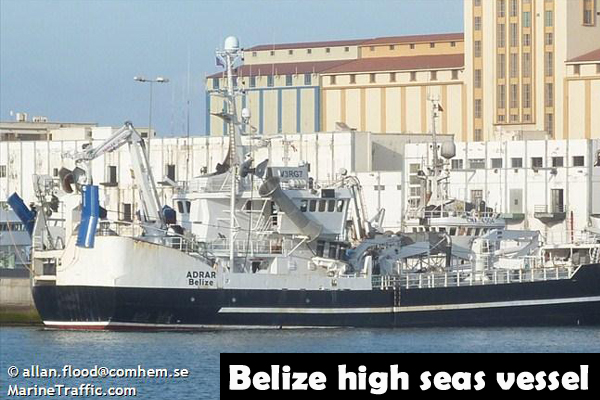 Local officials surprised: EU bans imports into the EU of any fisheries products caught by Belize vessels, and EU vessels will not be allowed to fish in Belizean waters

Belize “failed to show real commitment,” says EU; Belize officials say EU “must have been dealing with old information, because Belize has done everything it needed to do over the last three months.”

The European Commission (EC) announced out of Brussels, Belgium, today that it has moved to take concrete, historic action against Belize and two other countries: Cambodia and Guinea-Conakry, for alleged illegal fishing, by imposing new trade sanctions against them – this on the claim that these three countries have been “acting insufficiently against illegal fishing” on the high seas.

It is the first time that such measures are being adopted at this level of the EU—an economic and political partnership between 28 European countries, including Austria, France, Germany, Italy, the Netherlands, Spain and the United Kingdom.

“Today’s decision by the Council means that fisheries products caught by vessels flying these countries’ flags are now banned from being imported into the EU,” it said.

Apart from banning EU vessels from fishing in the waters of the blacklisted countries, it also said that “Other forms of cooperation, such as joint fishing operations or fisheries agreements with these countries will no longer be possible.”

Gandhi said that the blacklisting of Belize is “most unfair,” and that the European Union (EU) has totally disregarded Belize’s efforts to address concerns over Illegal, Unregulated and Unreported (IUU) fishing on the high seas.

He said that the Commission must have been dealing with old information, because Belize has done everything it needed to do over the last three months, since the EC threatened the sanctions back in November 2013.

Belize’s Embassy in Brussels notified the Government of Belize of the news this morning, but Belize has yet to receive any official correspondence from the EU, Gandhi said.

Gandhi said that the trade sanction only affects the high seas fisheries, and the ships, now banned by the EU, would now have to unload their fish at other ports or seek registration in other jurisdictions.

He told us that two EU officials, who visited Belize last month, got the highest level of political commitment from Prime Minister and Minister of Finance Dean Barrow that Belize was implementing the recommended changes.

At this morning’s Special Sitting of the National Assembly, right before the kickoff of the national budget debate, Prime Minister Barrow tabled two statutory instruments: the High Seas Fishing Sanctions (2014) — SI #32 of 2014 and the High Seas Fishing Licensing Regulations (2014) – SI #33 of 2014, which Gandhi said both came into force March 12. Gandhi said that the EU’s reps both in Jamaica and Europe were immediately advised of the legislative changes Belize has made –well in advance of today’s blacklisting.

However, the EC charges that, “All of the identified countries have failed to fulfil their duties as flag, coastal, port or market states typically by disrespecting the United Nations Convention on the Law of the Sea (UNCLOS) or the United Nations Fish Stocks Agreement.”

The press release did not say specifically why Belize was blacklisted and made no mention of the legislative changes Belize has made in the past months.

“I hope that this blacklisting will act as a catalyst for Belize, Cambodia, and Guinea to step up their efforts and work with the international community to eliminate illegal fishing,” European Commissioner for Maritime Affairs and Fisheries, Maria Damanaki, said in hailing what she deems as “a historic decision.”

Ghandi said that there must have been some “disconnect,” because the EC had said that they were happy with the legislative changes Belize was making.

Belize, he said, went further to enter into an agreement with Capricorn Fisheries Monitoring for a US$200,000 program which would ensure that observers are assigned to the high seas vessels as of April 1.

The EC claims that, “Despite the Commission working closely with the authorities of Belize, Cambodia and Guinea to set up fisheries management and effective control measures, the three countries have still not addressed structural problems and have failed to show real commitment to tackling the problem of illegal fishing.”

It added that after several warnings, the Commission, therefore, proposed to the Council to list the three countries as non-cooperating countries, in line with the EU IUU Regulation.

The original press release can be seen here: http://europa.eu/rapid/press-release_IP-14-304_en.htm.

Facebook
Twitter
Pinterest
WhatsApp
Print
Previous articleFood safety alert – are you buying from a certified source?
Next articleTravel and tourism netted BZ$1.2 billion or 36.6% of GDP in 2013: WTTC