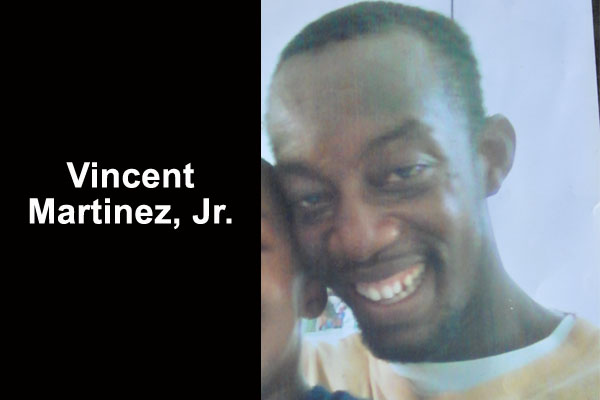 He was trying to change his life, but his past caught up with him, said his mother.

The cashier at the Puma Gas Station on the Philip Goldson Highway in Ladyville told Amandala that shortly after 6:00 yesterday evening, Wednesday, she heard a loud bang, which sounded like the blowout of a car tire.

“But I was busy attending to customers and never paid any attention to the source of the noise,” she said.

But a few minutes later, Ladyville police officers were demarcating a crime scene with tape, as they diverted traffic from off the highway, where a dark-skinned man lay stretched out at the bus stop, almost in front of the gas station.

The man lying on the ground, dressed only in a pair of blue jeans pants, was dead. He was identified as Vincent Martinez, Jr., 27, an unemployed resident of 8th Street, Kings Park. A pool of blood had formed on the ground where he lay. The blood had poured out from a gunshot wound visible at the right side of his head.

According to a police report, Martinez was sitting under the bus stop shed when a dark-complexioned man, who was dressed in a white shirt and a pair of black long pants, emerged from the direction of Marage Road and fired a single shot into Martinez’s head.

The shooter, police said, ran back in the same direction from which he had come. He jumped into a car that was waiting to help him escape from the scene of the deadly handiwork that he had executed so precisely.

Police said they are investigating, but so far, they have no suspect and no motive for the execution-style killing, which bears the hallmark of a gang-related hit.

Martinez’s body was transported to the Karl Heusner Memorial Hospital (KHMH) in Belize City, where he was pronounced dead at 8:15 p.m.

After Martinez’s body was removed from the scene, the officer in charge of Ladyville Police Station, Superintendent Chris Noble, told reporters that the police got information about the shooting.

“We have a person of interest that we are looking for. This person is not from this area,” Noble disclosed.

When he was asked if he knew whether or not the shooting was a drive-by or a ride-by, Noble replied that the investigation is in its early stage, and he was unable to determine the answer to that question.

Patricia Bowen, Martinez’s mother, told Amandala that the family had gone to Ladyville for the funeral of their uncle.

“After the funeral, they had a repast, but I did not stay for it. He [Vincent] did. So when I got a phone call telling me that my son was dead, I told them that it was not true,” she said.

She said that she thought the person who called her and gave her the bad news that her son was dead was pulling a prank on her.

Bowen said that when she realized that it was not a prank, she and her daughters went to the KHMH to await the arrival of the police vehicle that was bringing her son’s body from Ladyville.

She explained that in the earlier part of his life, when he was a teenager, “he used to give me a lot of problems.”

“He used to be in and out of run-ins with police,” she continued, as she fought with her emotions to stay composed, “but since he had his two daughters, he was changing his life.”

“My belief is that his past caught up with him,” his mother said.

Bowen said she never knew her son to be in a gang, but he had some friends on Supal Street that he used to associate with, but he hadn’t been over there in a long time.

“As I said, he was trying to change his life,” she repeated.

Martinez was the father of two young daughters.