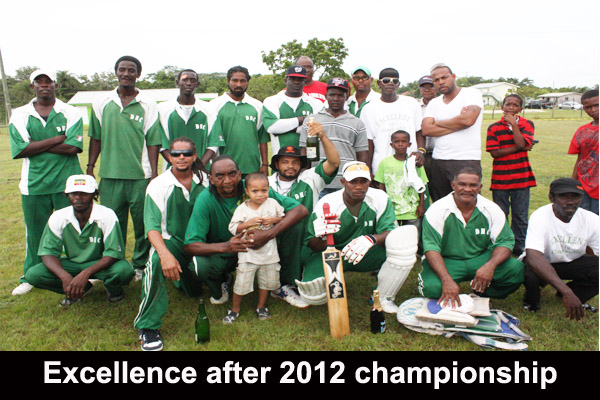 It rained so much in Belize City on Saturday morning, all indications were, and conveniently so, that the cricket game in the Belize River valley would be rained out. (We also wanted to see Belize vs Costa Rica in the Gold Cup on Saturday afternoon.) But, surprise, surprise! Just like when we drove from bright sunshine in Belize City a few weeks ago to find the cricket game rained out in Bermudian Landing; so it was on Saturday, that while the city was soaking wet, it was sunny and dry in Double Head Cabbage for Game 2 of the best-of-3 cricket finals to be played. Defending champion, Excellence of Double Head Cabbage had taken Game 1 the previous week in Crooked Tree; so, as our story in last weekend’s Amandala said, “It could end this Saturday in Double Head;” and it did.

There has been a tradition in cricket, and a couple weeks ago we were assured by cricket officials that there would be a separate “Trophy Day” on a later date, once a champion had been declared. But there was a change of plans on Saturday, and Excellence team members are likely satisfied with the departure from tradition, as they had waited all year long for their championship trophies for the 2012 season.

We missed a really good game, as well as the trophy ceremony. From the reports, Brilliant made an outstanding effort, and pushed Excellence to the limit, forcing them to live up to their name. Our regrets and sincere apologies to all the players in the Finals, and congrats to the repeat champions, Excellence!

Below is a report on Saturday’s game submitted by Elston Wade:

On Saturday, July 13, on their home pitch, Excellence of Double Head Cabbage defeated Brilliant of Crooked Tree by 1 wicket to clinch the back-to-back championship of the SMART Harrison Parks National Cricket Competition.

Brilliant scored 124 runs in their innings at bat. Excellence replied with 128 runs with 1 wicket to spare, to win Game Two and the championship.

The Men of the Match were Burke Howard and Emmanuel McFadzean III, who each scored 33 runs to secure the win for Excellence. Orson Flowers, who took 5 wickets, was the best bowler for Excellence.

The tournament’s Most Valuable Player was Marlon “Kamala” Nicholas, who is the superb bowler for Excellence. Trophies and other prizes were presented to the winners immediately after the match.

Big congratulations to the management and players of Excellence Cricket Club!!