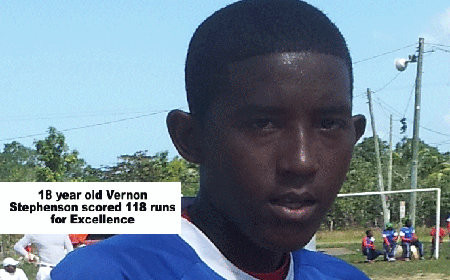 BELIZE CITY, Wed. Feb. 24, 2016–Hello, cricket fans, wherever you may be! Thanks to Smart and Belikin for once again sponsoring this year’s cricket competition. Under the auspices of the Belize National Cricket Association, the Harrison Parks 2016 Cricket Competition continued over the weekend with very exceptional games.

I will first take you to Sandhill, where Excellence, who have won many championships, went there having some very young players to play against home team Bright Star. Excellence won the toss and, without hesitation, took to bat. The first two batsmen quickly started to put a licking on the bowling of Bright Star. For nearly three hours, Excellence batsmen punished the Stars. When the last wicket fell, after one batsman had given up his inning to facilitate a young player, the team had put up a huge amount of runs – 358. Andy Dominquez, Sr. took 6 of Excellence wickets. Eighteen (18) year old Vernon Stevenson top scored with 118 runs. He went in first and came out last. He is publicly praised by me for his brilliance. Keep up the good playing, sir! Andy Dominquez, Jr. batted 54 runs.

After lunch break, Bright Star went to bat. They tried very hard, but with the consistent bowling of Marlon “Camala” Nicholas, who took 5 wickets, Bright Star could only bat 129 at the last wicket. Kendis Moody top scored for Bright Star, batting 64 runs.

A very hard but exciting game was played at Rancho De Dolores, where Western Eagles disciplined Team Police with a score of 74 to 39. Western Eagles went to bat first, and at the fall of the last wicket, the team could only score 74 runs against the stiff bowling of Baronlee Clare, who took down 3 of the Eagles wickets. In that inning, Travis Samuels top scored with 18 runs. I believe that Team Police thought they had this one, as the score seemed a bit small.

After lunch break, it was time for excitement. Well, it did not go the way Police might have planned, as at the fall of the last wicket, Team Police could only place 39 runs on their score board. In that inning, Baronlee Clare scored 11 runs, coming out of the match as the top batsman for his team. Justin Sanchez of Western Eagles took 3 wickets, showing he was the best bowler for the day.

At Crooked Tree, Sunrise played a close one against Brilliant, but came out on top with a score 134 to 104. Captain Gareth Joseph top scored with 52 for his team, Sunrise, while Calbert Reynolds, Landis Wade and Varon Westby took 3 wickets each for Brilliant. Glenroy Reynolds scored 18 for Brilliant, while Gilbert Segura took 5 wickets for Sunrise.

Wicked 11 had an easy run against Suga Boys, as they won with a score of 183 to 98. In that game, Travis Robinson hit the score board with 69 for Wicked11, and Clifford Tillett took 4 wickets for the sweet Boys. Michael Wade scored 42 for Suga Boys, and Justin Sanchez took 3 wickets for Wicked 11.

The games are being played the way it should. Please, I am appealing to all players, continue in this trend. Let us try and play the game the way it used to be played, when it was a pleasure for all to see the best performers.

This is the schedule for the weekend:

ZONE ONE – Excellence vs Police in Belmopan; Cashu Medicos vs Bright Star at Lords Bank; Western Eagles vs Easy Does It at Rancho De Dolores.

Have a great weekend, folks! Respect.