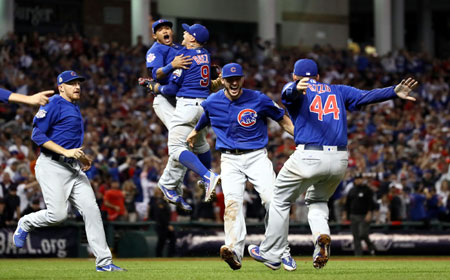 BELIZE CITY, Thurs. Nov. 3, 2016–When the ball settled into the glove of first baseman Anthony Rizzo from a throw by third baseman Kris Bryant off a Michael Martinez slow roller into the infield, Chicago Cubs fans went wild with joy, and that included long-suffering Cubs fans in Belize, who had “adopted” the Chicago Cubs since the early 1980s, when all they watched were Cubs games, and when the Cubs star outfielder Gary Matthews, Sr., came to Belize in the winter of 1985.

In Cleveland Indians’ Progressive Field, the Chicago Cubs shattered their 108-year championship drought with an 8-7, 10-inning World Series victory over the Cleveland Indians in Game 7 after causing consternation when in the 9th inning, the Indians leveled the playing field by tying the score 6-6.

For Belizean fans, like Cub fans everywhere, “heavenly joy had come to earth” when that last ball settled snugly into Rizzo’s glove. As one fan put it (on social media), “Now I can die in peace!”

In trying to explain Belizeans’ love affair with the Cubs, WGN-TV had said, “When television first came in 1981, one of the only two channels on the air was locked into Chicago`s WGN around the clock. That channel showed every Cubs game – all 162 of them” … In the winter of 1985, the Cubs sent star outfielder Gary Matthews on a goodwill mission to Belize when the Cubs captured the pennant.

“More people turned out to see Gary Matthews than turned out to see Queen Elizabeth the next year,” freelance writer Adam Rosen said. He said it got the people in Belize to think of the Cubs as “a friendly franchise that paid attention to them and cared about them.

According to WGN-TV, an anchor in Belize said the people there feel, “an almost spiritual connection to the Cubbies – a connection which, for many, continues to this day.”

And their hero was legendary Cubs broadcaster Harry Caray, who died in 1998. If someone told Cubs fans that in some mysterious fashion, Harry Caray had peeped in at Progressive Field, they would believe, and if further information was that he had broadcasted the game in his inimitable fashion to legions of delighted Cubbies in that far-away place, the afterlife, they would say, yes, Harry Caray would have done just that!

A massive parade for the champions is scheduled for tomorrow in Chicago.