A family of 5 is arraigned on drug trafficking charges 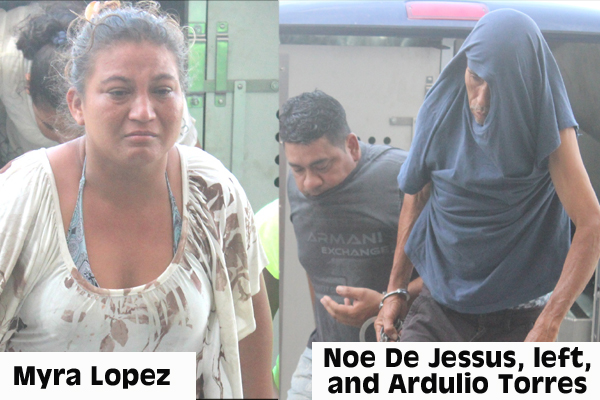 A Belize City family of five, including two minors, ages 12 and 14, spent their weekend in lockdown at the Queen Street Police Station after a police search of their Antelope Street Extension home yielded two separate parcels of crack cocaine, which amounted to 2.7 grams, and almost $10,000 in United States currency.

The family, who resides at #58 Antelope Street Extension, appeared before Magistrate Dale Cayetano today, and pleaded not guilty to the two counts of drug trafficking.

Ardulio Torres, 55, the oldest member of the family, attempted to plead guilty, telling the court, “I smoke crack. I don’t sell crack.”

After Torres denied selling crack cocaine, Magistrate Cayetano entered an unequivocal not guilty plea for him.

Torres was charged along with Noe de Jesus Martinez, 43; Myra Lopez, 33; and the two minors; they all pleaded not guilty to the charges.

The court prosecutor did not object to bail for them, and Cayetano offered them bail of $5,000 plus one surety in the same amount. By midday, all of them were able to secure bail.

Police searched their home around 4:30 p.m. on Friday, July 4, and the two parcels of crack cocaine were found inside a room on the upper level of the two-storey house.

The two bags were weighed and amounted to 1.5 grams and 1.2 grams respectively.

All the occupants of the house were taken into custody.

The homeowner, Ardulio Torres, was not at home when police conducted the search. He was arrested sometime around 7:30 p.m. on that same Friday.