FECTAB steps up pressure over rappel post at archaeological site 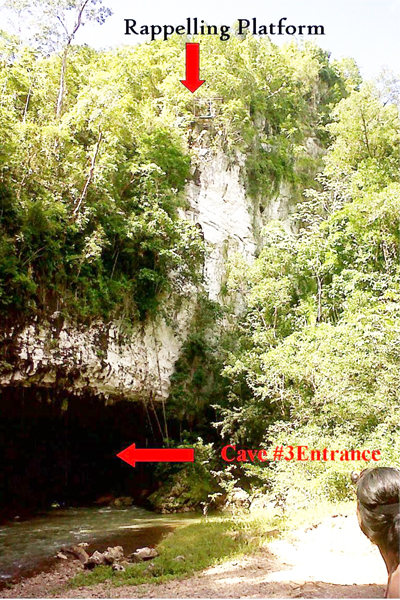 The Federation of Cruise Tourism Associations of Belize (FECTAB) remains unconvinced by the assurances of Chukka Cove Caribbean Tours based in Jamaica, and the National Institute of Culture and History (NICH), that a metal/wood rappelling platform built approximately six weeks ago above Cave 3 at the Nohoch Che’en Archaeological Reserve in the Cayo District, is safe for Chukka customers to use and will not lead to disaster.

FECTAB President Tom Greenwood and operators, Yhony Rosado of Cavetubing.com and David Almendarez of Cavetubing ‘R Us, this morning visited Amandala following an appearance on the Wake Up Belize Morning Vibes (WUB) show on KREM Radio.

Rosado, who told us he has been in the cave tubing business for 12 years, says that he has had “many ideas” for improvements to tours to the area, but never followed through because of the historical and archaeological importance of Nohoch Che’en, a cave system approximately 200 million years old and sacred to the ancient Maya.

But the platform, which is accessible only via a hidden walkway built directly above the entrance to Cave 3 in a rock formation containing limestone and other rocks, is, Rosado said, “destroying the Maya heritage” and according to Greenwood, is a “disaster waiting to happen.”

“It has to go; it is too dangerous to stay there. Chukka is a member of Green Globe, a UN-chartered organization charged with the development of tourism with responsibility and I think it is against their charter. What has to be brought out is how could the Government, NICH especially, allow them to build this for a high-risk activity above another high-risk activity. It’s double jeopardy, no?” Greenwood said.

According to Almendarez, it also represents another instance of unfair competition, as the platform is only authorized for use by Chukka Tours. They had previously benefited from constructions in the Crystal Cave area of the reserve. (NICH has said that the Crystal Cave Annex is open to all operators from two entrances, through Caves Branch and from the Chukka property, and that the Caves Branch entrance is accessible all year except when the cave is closed due to flooding, which happens on average about twice a year.)

At a meeting with NICH about 3 weeks ago, the operators of FECTAB were basically told, according to Almendarez, that they should “accept” what was going on, that it was “a done deal.”

Chukka Tours and NICH reported in separate press releases shortly after a FECTAB press conference held a few weeks ago, that the construction was done according to the international safety standards of “the Original Canopy Tour in Costa Rica, and the International Mountaineering and Climbing Federation,” and also meets U.S. standards for international amusement parks and attractions.

And, the creator of the system is quoted in the Chukka release as saying that rappelling participants come down about 20 meters away from where cave tubing participants pass, not directly over the entrance. NICH said it promised the operators to “further discuss and consider the issues presented by FECTAB and promised to respond to them within a timely manner.”

In reply, Greenwood told us that the safety issue derives not from the angle of how the platform is built, but where, and says that guests of FECTAB-aligned operations have expressed their concerns to him.

“It is not the province of NICH to guarantee the safety of our customers. That is physically impossible,” Greenwood told Amandala.