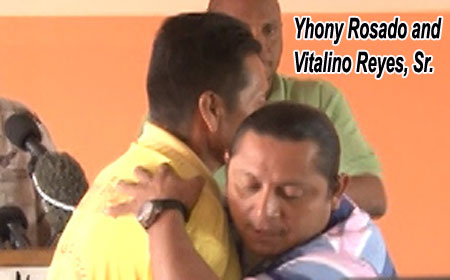 BELIZE CITY–“Bad blood” was put aside today when rival tour operators Yhony Rosado, of Cavetubing.com, and Vitalino Reyes, Sr., of Cavetubing.bz, reconciled their differences and embraced each other in a show of harmony during a press conference held by the Federation of Cruise Tourism Associations of Belize (FECTAB) at the Radisson Fort George Hotel in Belize City.

The competitors were drawn together for a common cause – a unified opposition on the part of the operators to a new policy handbook by the National Institute of Culture and History (NICH), which stipulates that all children who go cave-tubing must be at least four feet tall, which, the tour operators said, is threatening the survival of their business by taking that market away from them.

The issue is apparently so serious that the men were forced to bury the proverbial hatchet and speak out in unison against the rulebook, which, according to the tour operators, was developed without consultation and published in July 2014 under the initiative “Making Tourism Benefit Communities Adjacent to Archaeological Sites”.

President of the Citizens Organized for Liberty through Action (COLA), Geovannie Brackett, who took on the role of mediator this morning, asked both men to put their differences aside, stand in front of the audience, and shake hands as a sign of unity in the fight against what Brackett categorized as “an evil system that wants to wipe us away”.

After the event, Reyes told the media that showing forgiveness is the ethical and Godly way of dealing with the situation.

He said, “Everything I do is for my family … for my children. This is very serious, this whole thing, my whole business – I could stay without business, and I work in this for my children, my grandchildren, and everybody else. It [the situation] is really so bad that I had to make peace with Yhony Rosado because I believe in God, and whatsoever he had done or whatever, it is just a matter of giving a chance for him to be a better person.”

“My business will continue [for the sake of] my children [and] grandchildren. I want to show an example to Belize, to all Belizeans, that no matter what happens, no matter what they do to you, you need to pardon other people. That’s what [Jesus] Christ did. They crucified Him on the cross and nailed [Him] down; they did a lot of things to Christ, and what did he say? He said, ‘Pardon them, because they don’t know what they are doing’ “, he went on to proclaim.

The protracted record of hostility between Reyes and Rosado started several years ago and had resulted in both men being put before a disciplinary panel of the Belize Tourism Board (BTB), which had consequently threatened to cancel their operating licenses.

That still didn’t stop the contention since, in August of 2012, the men were involved in another face-off in which Rosado ran afoul of the law after allegedly brandishing a gun at Reyes’ son, Vitalino, Jr.

Rosado was eventually remanded to the Belize Central Prison for one night after he was arrested four months later for the incident, but was later acquitted of the charge in the Belmopan Magistrate’s Court in September of 2013.

The most recent fallout, and probably the most serious of the once bitter rivalry, unfolded when employees of both companies clashed at Long Island Bar off Coney Drive in Belize City on May 29 of this year.

During that brawl, Vitalino Reyes, Jr. was allegedly attacked, clubbed unconscious and hospitalized for an extended period of time, while at least six of Rosado’s employees were made to face criminal charges for the assault.

That matter is still before the courts, but Reyes, whose son has thankfully made a full recovery, mentioned today that he is proud of his decision to replace the adversity with unity in the name of progress.