BELIZE CITY, Mon. June 5, 2017–With little fanfare, the long anticipated National Over-40 Football Tournament 2017 kicked off over the weekend with 3 games played. With the late addition of the Lake team from Belize City, there are now 8 teams in the competition, and thus 4 games are expected this weekend. The revised schedule will be released later this week, according to Over-40 Chairman, Peter Alvarez.

In the only game on Saturday night, June 3, at the Isidoro Beaton Stadium, Benque Veterans dropped Belmopan Veterans, 3-0, with goals from David Aldana (3’ & 56’) and Luiz Martinez (53’). 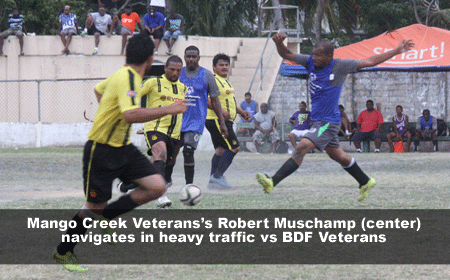 Along with late entry, Lake, the action this coming weekend will be joined by perennial Over-40 powerhouse, Kulture.