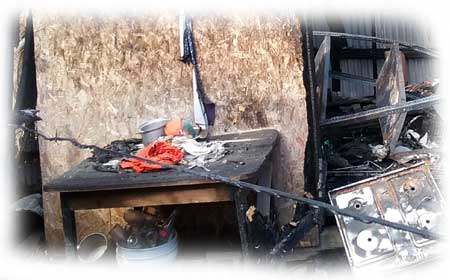 BELIZE CITY, Mon. July 17, 2017–At about 3:30 yesterday morning, while most people were sleeping, fire engulfed and destroyed three houses in a yard on Supaul Street, leaving 9 people homeless. All their household furnishings and other possessions were destroyed.

One of the houses which were destroyed was a plywood house measuring 15 ft. by 25 ft. that belonged to Devon Sankey, 24, a construction worker. Another house located in the same yard, also made of plywood, measuring about 20 ft. by 30 ft., belonging to Shern Williams, 40, was partially damaged, because a part of it is made of concrete, and a third house in the yard was also destroyed completely.

A neighbor of the homeowners told us that he was going home when he saw smoke coming from out of the yard, and went to investigate. He saw flames coming out of the plywood house next to Devon’s house, and it began to spread. He said that he immediately roused everyone and activated a fire alarm.

The neighbor said that the fire spread quickly, but no one was injured, because they evacuated the houses in time. Nothing could be saved, however.

The National Fire Service was alerted and the firemen went to the scene quickly and put out the fire.

After the fire was put out, fire investigators classified the cause of the fire as electrical, originating from an overheated television wire.

The victims of the fire are seeking public assistance, including clothing, and books and uniforms for the children who had lived in the destroyed homes, and also for a student who is attending Maud Williams High School.

Donations can be taken to the family yard on Supaul Street, or the family can be contacted at 666-0129. 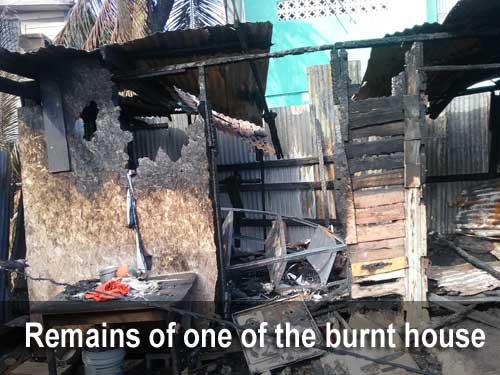