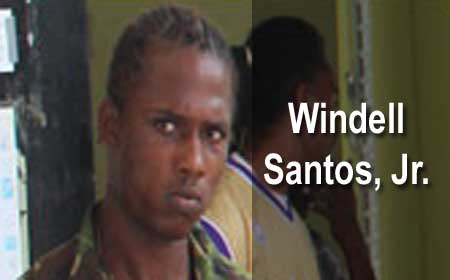 BELIZE CITY, Thurs. Aug. 24, 2017–Over the last four days, four men have lost their lives to the callous violence that has become common in Belize City. The latest victim, Windell Gibson, Jr., 26, was killed today, Thursday, August 24, around 4:30 in the afternoon.

Gibson, also known as “Horse” or “Footie,” was at the junction of East Collet Canal and Lindo’s Alley, near the popular Conch Shell Bay fish market, where a cement structure, inside which the fishermen clean their catch, spans the river.

Information to Amandala is that Gibson was speaking to Pomona resident Karron Santos, aka “Killa”, 24, when two men pulled up on a motorcycle.

One of the men, armed with a pistol, dismounted, and fired eight shots in the direction of the duo. The motorcycle riders then fled the area.

Gibson was shot three times, a shot to the center of his chest reportedly being the one that claimed his life. On the street beside his body was a knife and fish scraper.

Karron Santos was shot in the right side of the midsection and hand.

Gibson reportedly died on the scene, while Santos is hospitalized at the Karl Heusner Memorial Hospital, reportedly in a critical but stable condition.

When Amandala spoke to one of Gibson’s sisters at the hospital, she told us that she never imagined this day would come. She said that he had gone to the fish market because that is where he had earned a living for almost a decade, cleaning and selling fish.

Gibson, a seaman who resides in the St. Martin De Porres area of Belize City, leaves behind three brothers and four sisters.

When Amandala spoke to Santos’ sister at the hospital, she told us that her brother had gone to buy fish at the market.

Sources in the Police Department have indicated to our newspaper that they believe that Santos was the target, but it was a case of mistaken identity.

Our police source revealed that Santos fit the description of a Majestic Alley resident who had switched loyalty to the George Street Gang.

At the time of the shooting, the man the killers wanted was reportedly at sea.

Our police source has revealed that the shooter is from a neighboring Bloods gang. Police have not yet made any arrests for this broad daylight shooting incident.