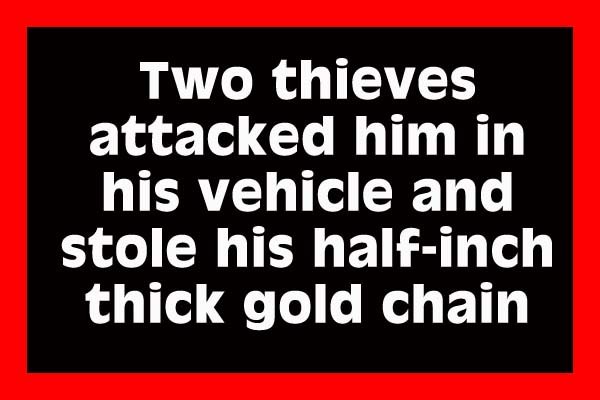 An employee of the Fisheries Department on Princess Margaret Drive was beaten and robbed while sitting in his vehicle, which was parked at about 10:00 yesterday morning in front of a store in the high-crime area of Lakeview Street, on the south side of the city.

The two robbers got away with the man’s half-inch thick gold chain with a cross medal, designed with eight circular stones on it, hanging from his neck. The value of the chain has not yet been ascertained.

The employee, who was the driver of the vehicle, had his window down because he was waiting for a beer that one of his friends had bought from the shop and was bringing to him.

The victim reported that while sitting in his vehicle, a man approached, grabbed his chain from around his neck and tried to rip it off.

The victim said that he held on to his chain, and a fight ensued, during which another robber came up, grabbed him out of the vehicle and he was tackled to the ground, during which the two thieves punched and kicked him.

The thieves managed to take away the chain and they both ran away.

Police have detained a man, 22, and are seeking the second thief.