Flooding cuts off part of Toledo at Barranco junction and Jacintoville 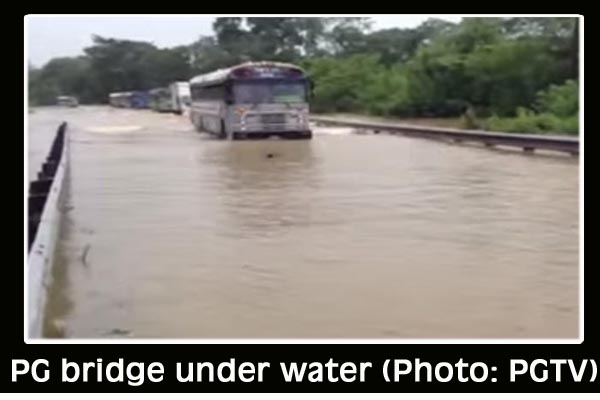 Thursday night thunderstorms caused extensive flooding roughly 8 miles out of Punta Gorda Town on the Southern Highway, in the vicinity of the Jacintoville Bridge near its junction with the road to Barranco.

The waters initially rendered the road impassable and buses were delayed until around 9:00 that morning. Smaller vehicles were able to cross at around 10:00 a.m. and by noon Friday, the waters had receded.

PGTV’s Wil Maheia shared with us a video clip of the flooding, which showed a man in a canoe wading alongside the buses that were making their way through the flooded waters. Maheia told Amandala that the area in question is very prone to flooding but this time, the waters seemed higher than usual, registering 10 feet above normal flood stage, he indicated.

Belize Defence Force officers stationed in Punta Gorda were deployed with 4-ton trucks to assist area residents impacted by the flood. Dories provided by Danny Edwards from Jacintoville were used to help people safely cross the flooded sections of the road.

No one was hurt and no damages to property were reported.