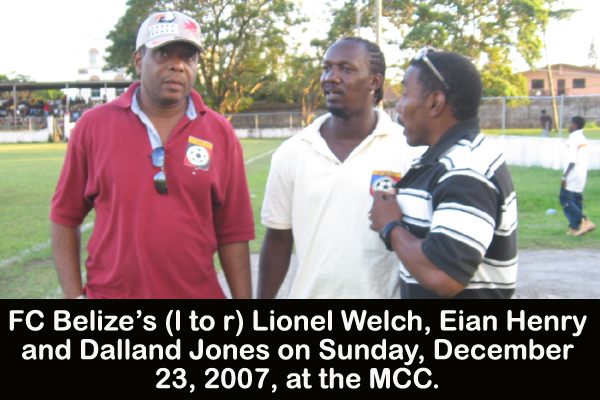 It was in mid-November of last year, during a most competitive and exciting Premier League of Belize (PLB) Belikin Cup Opening Season 2013-2014, that FC Belize long time and original owner/manager, lawyer Lionel Welch suddenly departed for emergency medical attention abroad, days before his team was to travel to Belmopan’s Isidoro Beaton Stadium for a Saturday night, November 16, encounter with the Belmopan Bandits. Both teams were former semi-pro champions, FC Belize back in 2006 and 2007, and the Bandits as recently as 2012. But, despite Welch’s absence, which led to a bit of controversy over some unpaid yellow card bills, FC Belize pulled out a surprising 3-2 road victory, that prompted the Bandits owner, Hon. John Saldivar to seek additional help for his coaching staff, then headed by Edmund “Buzzard” Pandy who had steered them to their first ever championship a couple seasons earlier. But Saldivar was taking no chances; and he managed to lure former national team coach, Leroy Sherrier Lewis back from Costa Rica in mid-season to lead the Bandits effort the rest of the way.

Under Welch’s guidance, the FC Belize team had over the years become almost like an academy for young players in the Belize District, especially Belize City, as a number of good talents soon moved on to other big name clubs, with FC Belize always managing to groom some more young talents. And the team had somehow always remained competitive in the league, barely missing the playoffs by goal difference only a year ago, and reaching the finals in the last season, where they had to settle for the runner-up spot to Police United in the 2012-2013 Closing Season in May of 2013.

Marvin Ottley was a fixture on the FC Belize coaching staff during most of those years since the formation of the club back around 2005, and he was for a number of those years assisted by Fred Garcia, Jr. of U.S. college basketball and Belize National Team basketball fame. Fred had learned the fundamentals of athletic training and top level competition, and his football I.Q. grew quickly, so that when Marvin had to share his time early in the season with some other business commitments, Fred took up the reins and, with assistance shortly after from Brazilian born Jorge Nunez, FC Belize was once again in the Finals, this time against the Bandits and former national team coach, Leroy Sherrier Lewis.

The roller coaster ride ended harshly for the young FC Belize team in Game 2 of the Finals on Saturday night, February 8, as the star studded Bandits, led by Belize’s acclaimed super-striker Deon McCaulay won by a lopsided 5-1 score, with McCaulay netting 4 goals.

But reaching the Finals was still a big accomplishment for the young team, and Welch’s dad was proud to hold the second place team trophy in place of his son, who was reportedly on the mend in California. He said he planned to take the trophy to his son.

In football circles, the word was that ‘Nel (short for Lionel), as he was affectionately known, was recovering slowly, and would hopefully be back in Belize sometime soon to greet friends and celebrate the achievement of his team.

But as the dust from the past tough competition was settling, and the talk was beginning on the start of the new season, football fans were caught off guard this morning with the jolting news that Nel had passed yesterday evening. Initial reports when he had left in November were that his illness was serious, so serious that he had to undergo an induced coma for the special treatment he was receiving. But that was over two months ago, and many fans had lapsed into a feeling of complacency and a sense of security, not having a full idea of the extent or severity of his ailment. However bad it was (late reports are that it was prostate cancer), we expected Nel to return home, as reports indicated was the plan. But it was not to be.

We knew Lionel Welch from the 1970’s when he played football with teams in the Belize City competition (I remember 2nd Division Grant’s Royal). And when there was a football revolution of sorts in elections to the 1983-84 Belize Amateur Football Association (BAFA) executive, Lionel was elected as Vice-Chairman to a new committee led by Chairman Anthony “Garrincha” Adderley, with secretary Henry Baizar, and including committee members Albert Cattouse, Jr., Michael Usher, yours truly, and I think Anthony “C” Cattouse (deceased). Nel’s love for the game was sincere and unconditional.

Later in the 80’s Nel served as BAFA Chairman for a while, and then also served for a while on the national association as Vice-President of the BNFA (Belize National Football Association).

In 2005 Welch formed his own team, FC Belize, and in 2006 and 2007, the team became champions of the BPFL. In recent competitions, FC Belize reached the Finals in the last two Premier League of Belize tournaments, and was sub-champ on both occasions.

In a few instances, some members of his management team felt that Nel was too patient and tolerant of some young players who came to the team with deep seated personal and discipline problems. I think Nel saw the team as a way to hopefully salvage some of the young men and teach them essential life skills and values, but it was a difficult struggle.

At the time of his passing, Lionel Welch, a practicing attorney at law, was also the legal advisor to the FFB.

Reports are that his ailing mother, Emma Cattouse, also passed yesterday a few hours after receiving the news of her son’s death.

The Amandala sports desk joins with members of the football family in extending our sincere condolences to Lionel’s father, son Damien, and all surviving relatives and friends of our brother in football, Lionel ‘Nel Welch and his beloved mom, Emma. May they rest in peace and rise in glory.

And may the legacy of this stalwart son of Gales Point Manatee, Lionel Welch be carried on in his FC Belize football club.